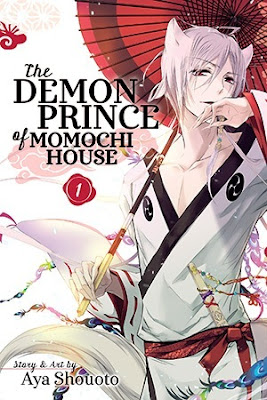 San Francisco, CA – VIZ Media, LLC (VIZ Media), the largest distributor and licensor of manga and anime in North America, has announced the launch of Aya Shouoto’s THE DEMON PRINCE OF MOMOCHI HOUSE.

The shojo manga (graphic novel) series about a teenage girl who inherits a haunted house is rated ‘T’ for Teens and carries a print MSRP of $9.99 U.S. / $12.99 CAN. The series is also available digitally via VIZManga.com and the VIZ Manga App as well as from the Nook, Kobo, Kindle, iBooks, comiXology, and GooglePlay stores. Future volumes of the series, which is also ongoing in Japan, will be published quarterly under the Shojo Beat imprint.

On her sixteenth birthday, orphan Himari Momochi inherits her ancestral estate that she’s never seen. Momochi House exists on the barrier between the human and spiritual realms, and Himari is meant to act as guardian between the two worlds. But on the day she moves in, she finds three handsome squatters already living in the house, and one seems to have already taken over her role!

“THE DEMON PRINCE OF MOMOCHI HOUSE features the exquisite artwork and beautiful character designs that have made Aya Shouoto a star in shojo manga,” says Nancy Thistlethwaite, Senior Editor. “The endearing relationships among the residents of Momochi House will make this a special series for shojo manga fans.”

Posted by Leroy Douresseaux at 5:42 PM