Review: "Scooby-Doo! Frankencreepy" is One of the Best Scooby-Doo Movies Ever 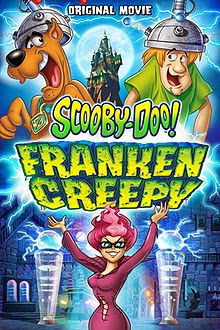 Early in Scooby-Doo! Frankencreepy, Velma Dinkley (Mindy Cohn) gets a call from Cuthbert Crawley (Kevin Michael Richardson), a lawyer.  It seems that she has received an inheritance from her great-great-uncle, Basil Von Dinkenstein (Corey Burton) – property and a castle in the town of Transylvania, Pennsylvania.

However, Crawley informs Velma that the castle comes with the Dinkenstein family curse, which destroys what a person loves the most.  Not long after that warning, the Ghost of the Baron (Corey Burton) makes his appearance, and something beloved by the Mystery Inc. gang is destroyed.  Never ones to ignore a mystery, Fred Jones (Frank Welker), Daphne Blake (Grey DeLisle), Shaggy Rogers (Matthew Lillard), and Scooby-Doo (Frank Welker) join Velma and travel to the strange village of Transylvania, where angry villagers and a bizarre creature await them.

Scooby-Doo! Frankencreepy is not only one of the best Scooby-Doo direct-to-DVD films; it is also one of the best Scooby-Doo cartoons ever.  The superb script by James Krieg recalls the first Scooby-Doo series, Scooby-Doo, Where Are You! (1969-1970), both in spirit and in deed.  Frankencreepy is an homage to the classic, original Scooby-Doo, but it is also a modernization that stays true to what is beloved about this franchise.  The story is also a breath of fresh air for this direct-to-DVD franchise, in that it makes the characters do unexpected things.  The mystery at the center of the film is both executed and solved in surprising fashion.

Frankencreepy has a striking visual aesthetic that also harkens back to “Scooby-Doo, Where Are You!” with an art deco twist.  The backgrounds, village, Von Dinkenstein castle, interiors, etc. recall the classic animation art of Looney Tunes masters, Chuck Jones, Maurice Noble, and Phillip DeGuard.  The animation almost seems like the cartoons of Charles Addams brought to life.  Frankencreepy is truly one of the most beautiful animated films that is not also a major feature film production.

Obviously, I am crazy about this Scooby-Doo movie.  Director Paul McEvoy keeps the story moving with an occasional offbeat moment or pace that assures that no one will think Scooby-Doo! Frankencreepy is just another Scooby-Doo cartoon.  I would like the creative team behind this movie give us at least one more Scooby-Doo movie.