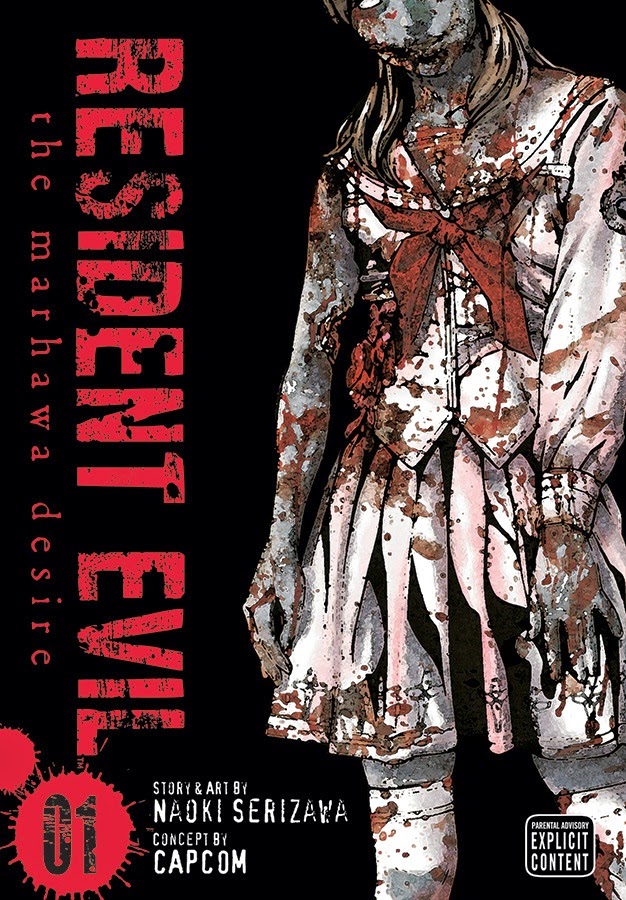 The terrifying 5-volume apocalyptic action thriller was created by Naoki Serizawa and serves as a prequel to the storyline of CAPCOM’s bestselling Resident Evil® 6 game property. The manga series is rated ‘M’ for Mature Readers and will launch on November 18th under the VIZ Signature imprint. RESIDENT EVIL: THE MARHAWA DESIRE Vol. 1 will carry a print MSRP of $12.99 U.S. / $14.99 CAN.

Held each year, Halloween ComicFest is celebrated at scores of comic shops and retailers nationwide on the Saturday before Halloween. On this day, participating shops offer fans and visitors a special FREE Halloween ComicFest sampler filled with previews of scores of exciting upcoming titles. For additional information and a list of participating retailers, please visit: www.halloweencomicfest.com.

The highly virulent C-virus became a global disaster, but where did the outbreak start? In the series’ opening volume, at the prestigious and elite Marhawa Academy in Singapore, a female student suffers a horrifying transformation. Called in to investigate, Professor Doug Wright and his nephew Ricky find themselves caught up in a deadly and growing tragedy. As things get rapidly out of hand, Chris Redfield and his team from the Bioterrorism Security Assessment Alliance arrive on the scene, while behind it all a mysterious figure looms.

“Discover the sinister beginnings of the Resident Evil story in the first-ever manga series based on the smash hit game property,” says Michael Montesa, Editor. “Along with tracing the source of the deadly viral outbreak, the manga series also presents the debut of Piers Nivans, who appears in the Resident Evil 6 video game as Chris Redfield's new partner. Readers will not want to miss a special advance preview of RESDIENT EVIL as part of Halloween ComicFest. Catch the full launch of this spine tingling new series from the VIZ Signature imprint next month!”

Since the landmark release of Resident Evil in 1996, the CAPCOM franchise has firmly established itself as a truly worldwide entertainment brand and mainstay of contemporary culture with a series of live action movies, CG anime, manga, novels and numerous merchandising lines. To date the Resident Evil series of videogames has achieved global sales of over 50 million units, while the live action movies starring Milla Jovovich have grossed in excess of $525 million dollars at the box office.

RESIDENT EVIL artist/author Naoki Serizawa is a multi-talented photographer and cinematographer as well as a manga artist and writer. His other series Saru Lock was developed into a TV drama in Japan in 2009.

For more information on RESIDENT EVIL: THE MARHAWA DESIRE or other manga and/or anime titles published by VIZ Media, please visit www.VIZ.com.