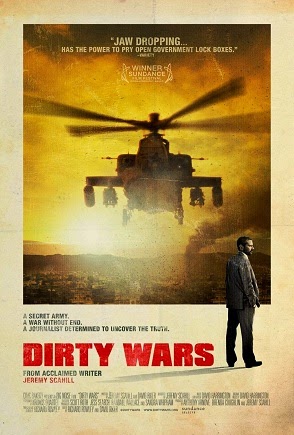 Dirty Wars is a 2013 documentary film directed by Rick Rowley and written by Jeremy Scahill and David Riker.  The film accompanies Scahill's 2013 book, Dirty Wars: The World is a Battlefield.  Dirty Wars the movie follows Scahill as he tries to find the hidden truth behind America's ever-expanding covert wars.

Jeremy Scahill is an investigative journalist, perhaps best known for his book, Blackwater: The Rise of the World's Most Powerful Mercenary Army.  He is also the founding editor of the online news publication, The Intercept.

Dirty Wars begins with Scahill's investigation of a series of night raids in the country of Afghanistan, and one particular raid captures his attention.  It occurs in Gardez (the capital of the Paktai province) on February 12, 2010, in which five people, including two pregnant women, are killed by armed men.

Scahill's investigation leads him to the Joint Special Operations Command (JSOC), which is charged with identifying and eliminating terror cells worldwide.  Scahill learns that JSOC's mission is expanding to more countries and includes a constantly growing “kill list.”

Dirty Wars provides an overview of America's covert wars, beginning with the invasion of Afghanistan and the war in Iraq.  Scahill, who narrates and stars in the film, presents a gripping premise, but his subject or topic is too big and too broad for a film that does not last an hour-and-a-half.  Scahill names specific players, points to specific victims, and seems to be traveling back and forth over half the world.  Still, everything seems a bit vague, as if some kind of context is missing.

Perhaps, Scahill should have focused on fewer victims and targeted specific American politicians and players in the covert wars for longer on-camera interviews.  I think that what is on-screen in Dirty Wars is investigative journalism that is important for everyone to see, and not just Americans.  Scahill's story also makes for a riveting movie narrative.  The look on Scahill's face during an appearance on “Real Time with Bill Maher” is priceless and says a lot about the sorry state of American political commentary.  Dirty Wars is, however, a small movie that is a bit too sweeping in its scope.


Posted by Leroy Douresseaux at 2:06 PM