Review: "The Curse of the Jade Scorpion" a Nice Ode to 1940s Era Films 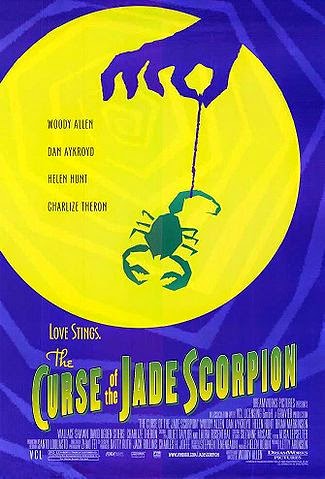 The subject of this movie review is The Curse of the Jade Scorpion, a 2001 romance, crime-comedy and mystery film from writer-director Woody Allen.  The film follows an insurance investigator and an efficiency expert, both hypnotized into stealing jewels by a crooked hypnotist using a jade scorpion.

New York City – 1940:  C.W. Briggs (Woody Allen) is the top insurance investigator for North Coast Casualty and Fidelity of New York, and he is his boss, Chris Magruder’s (Dan Aykroyd) go-to-guy when it comes to solving the thefts of high value items that North Coast is insuring.  C.W. has also been sparring with the company’s latest hire, Betty Ann Fitzgerald (Helen Hunt), an efficiency expert with an eye on putting C.W. in his place.

At a dinner party, a crooked hypnotist named Voltan (David Ogden Stiers) uses a jeweled charm, the Jade Scorpion, to hypnotize C.W. and Betty Ann.  Soon, the combative co-workers are babbling like love struck kids.  Their colleagues think this is some kind of clever hypnosis gag, so no one realizes that Voltan has placed C.W. and Betty Ann under a post-hypnotic suggestion.  Voltan controls C.W. and makes the insurance investigator use his professional skills and inside information to steal a fortune in jewels from two prominent families that have insured their treasure with North Coast.  With the police after him for the robberies, will C.W. ever get a clue that he’s a hypnotized dupe?

The Curse of the Jade Scorpion is Woody Allen’s delightful ode to movies from the 1940’s, like his delightful 1987 movie, Radio Days, was.  Jade is a nod to the light mystery films of the 40’s, but here, this material isn’t particularly strong, although the acting is quite good and gives the movie a sense of earnest fun.  The entire cast seems up to recreating both the style and ambience of 40’s era movies and the characters in them, and that’s a credit to Allen’s direction.

Helen Hunt is spicy as Betty Ann Fitzgerald, and she makes an excellent foil for Allen’s C.W. Briggs, who is the typical wisecracking character Allen plays in his comedies.  Charlize Theron glams it up to create the sexy, bold, and randy Laura Kensington, a character with an unfortunately too small part because she gives this flick a much-needed kick in the rear every time she’s on screen.  Brian Markinson, Elizabeth Berkley, and Wallace Shawn also add the right touches to their parts and add flavor to this film.

The Curse of the Jade Scorpion isn’t great Allen, nor is it anywhere nearly as good as Radio Days.  It’s a minor, but good Allen flick that will entertain Allen fans to one extent or another.


Posted by Leroy Douresseaux at 9:09 AM