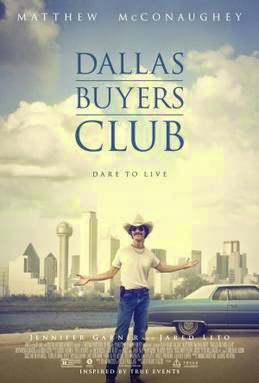 DRAMA/BIOPIC with elements of a historical

Dallas Buyers Club is a 2013 biographical drama from director Jean-Marc Vallée.  The film is a dramatization about real-life AIDS patient, Ron Woodroof.  He discovered unapproved pharmaceutical drugs that would help his disease symptoms and then, later smuggled those drugs into Texas to help fellow AIDS patients.  The film was critically acclaimed and won three Oscars, including a best actor win for Matthew McConaughey and a best supporting actor win for Jared Leto.

Dallas Buyers Club opens in 1985 in Dallas.  Electrician, hustler, and rodeo cowboy, Ron Woodroof (Matthew McConaughey) falls ill and is diagnosed with HIV.  He is given 30 days to live.  Ron initially refuses to accept the diagnosis, but quickly finds himself ostracized by friends and coworkers.  Ron learns from the kindly Dr. Eve Saks (Jennifer Garner) about the experimental drug AZT, which is supposed to help with symptoms of AIDS.  Ron is able to obtain some without having a prescription.  However, he not only abuses AZT, but he also continues to abuse illegal narcotics.

Ron develops full-blown AIDS.  As he fights to live, he begins to study and research AIDS and learns that outside the United States there are pharmaceutical drugs used to fight the symptoms of AIDS.  However, they are unapproved for use in the U.S. by the FDA (Food and Drug Administration).  Ron begins to smuggle large quantities of these drugs into Dallas.  With the help of Rayon (Jared Leto), a sassy cross-dressing man/transgender, Ron opens the “Dallas Buyers Club” to sell these unapproved drugs to HIV-positive and AIDS patients, but Ron’s efforts draw the attention of people who want to shut him down.

I have seen many films that are elevated by a great performance.  Raging Bull is memorable for Robert De Niro’s legendary turn as boxer Jake La Motta.  Russell Crowe gives the most nuanced performance of his career in A Beautiful Mind.  Helen Mirren rules The Queen.  In fact, all three of these movies would be little more than made-for-television films without the celebrated performances given by their respective lead actors.

Dallas Buyers Club tells a story that needed to be told and needs to be remembered, but without Matthew McConaughey’s performance, this film would be a well-meaning TV movie or an indie film that would have been lost in the art film ghetto.  McConaughey risked his health in order to lose weight to play the emaciated Ron Woodroof, but what really makes his performance so distinguished is that McConaughey takes on Woodruff’s cause and suffering as if his own life depended upon it.

McConaughey is a good actor and has given some excellent performance.  However, in recent years, he has finally showcased his talent and skill in character study films that require putting out the effort to create fully-realized fictional characters.  Anyone who is a fan of McConaughey or has seen some of his films must see Dallas Buyers Club.

Both Jared Leto’s transformation into Rayon and his performance are impressive.  Leto was indeed Oscar worthy, but Rayon is mostly unnecessary to this story.  Although Rayon was not a real-life figure and was created specifically for this movie, he could have been replaced with just about any other character.  Leto is magnificent in a film in which the filmmakers didn’t seem to know what to do with his character other than to play him as a stereotype – the tragic mulatto version of drag queen.  Jennifer Garner’s Dr. Saks is also wasted, although not nearly as badly as Rayon is.

However, Matthew McConaughey is so good that he makes you overlook Dallas Buyers Club’s warts.  His character, Ron Woodroof, is a charming rogue with electrifying swagger.  It is as if McConaughey and Woodroof are two separate beings occupying the same space, and they are why Dallas Buyers Club earned a best picture Oscar nomination.  And that best picture Oscar nod made what would have been just an AIDS movie into something special.


Posted by Leroy Douresseaux at 9:00 AM