Review: "RoboCop" Remake Has Lots of Ideas, but Lacks Focus 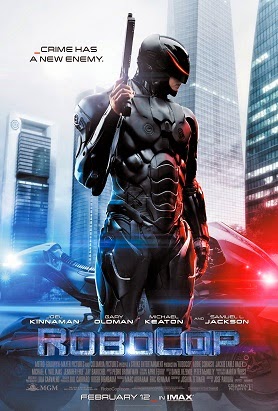 RoboCop is a 2014 science fiction film from director José Padilha.  The film is a remake of the Oscar-winning, 1987 film, Robocop.  The 2014 RoboCop follows a police detective who is transformed into a part-man/part-robot police officer by a powerful corporation that wants to place robot police officers all over America.

The film opens in year 2028.  Omnicorp, a division of the multinational conglomerate, OCP, specializes in “robot soldier” technology.  Omnicorp supplies the robots and drones that the United States military uses to pacify populations around the world.  Omnicorp wants to sell their product in the U.S. for civilian law enforcement, but is prohibited both by the federal Dreyfus Act and by public opinion.

Omnicorp CEO Raymond Sellars (Michael Keaton) concocts the idea of creating a new law enforcement product that blends the human police officer with the robot.  Sellars believes that this kind of police officer could really help Detroit, the crime-ravaged home city of Omnicorp.  Dr. Dennett Norton (Gary Oldman), a scientist under contract to Omnicorp, believes that he can take a permanently injured police officer or solider and use him as the core of a robot policeman prototype.  He wonders, however, if he will find the kind of police officer that is perfect for his experiment.

At the Detroit Police Department, Detective Alex Murphy (Joel Kinnaman) and his partner, Sergeant Jack Lewis (Michael K. Williams), are pursuing drug lord, Antoine Vallon (Patrick Garrow).  However, Vallon has an unknown number of crooked cops on his payroll, and they keep him apprised of Murphy and Lewis’ investigations.  Vallon orders Murphy killed, but Murphy survives the attempt, just barely.  Suddenly, Murphy is the perfect subject for Dr. Norton’s bid to create a part man/part machine cop, and RoboCop is born.  But how much of Alex Murphy is left inside of RoboCop, and how much of him does Omnicorp want to control?

The 1987 Robocop featured a number of thematic elements, and it contained black humor and satire, especially early in the film.  It was also a quasi-Western with RoboCop/Alex Murphy as a kind of frontier lawman facing off against heavily-armed criminals and a corrupt government all on his own.  RoboCop 2014 also includes themes about corporate manipulation of governments, the militarization of law enforcement, and the man-machine interface, among others.  There is a gallows humor about the remake, and it also has elements of the Western film.  That is where the comparisons end, for the most part.

RoboCop 2014 has a big problem in that it lacks focus.  The screenplay for the 2014 film takes almost every subplot, setting, and character from the 1987 film and makes them so important – even the elements the original film largely passed over.  For instance, Alex Murphy’s family was largely unseen, except for in flashbacks, in the 1987 film.  In the 2014 film, however, Murphy’s wife and son are important to the point of being in the way of the story.

It is almost Shakespearean the way the screenplay for the new film wants to make every supporting character and two-bit character a major player in the plot and story.  I could not help but think that more could have been done with Samuel Jackson’s Pat Novak, a Bill O’Reilly-like host of the pro-corporate, law and order television show, “The Novak Element.”  But where would he fit in an already overstuffed story?

With so many ideas and characters, RoboCop 2014 ends up without an identity.  In the original film, the title, Robocop, really meant that the movie was about Alex Murphy/RoboCop.  In the remake, the title RoboCop is practically about the idea of the “robot cop” or RoboCop.  The film is about weighing the good and the bad of having corporately-controlled robot cops patrolling the streets of America.  RoboCop/Alex Murphy just happens to be the robot cop of the moment.  Without an identity, what is RoboCop 2014?  Is it about Alex Murphy?  Is it about Omnicorp’s plans?  Is it about military technology as law enforcement?  Is this movie about corporate product as a means to uphold law and order?  Is it about Dr. Dennett Norton’s questionably experimentation on humans?

There is so much stuff in the new RoboCop that it would work better as a television series than it works as a two-hour feature film.  It is not a bad movie; it is simply packed with too many good ideas, characters, and plotlines.  That is a shame, because RoboCop 2014 is a cautionary tale.  It is a Frankenstein scenario that is relevant to our current times.  RoboCop warns us to beware of profit-driven, multi-national corporations that want to sell us permanent war and also a police state because those are the means by which they make piles of corporate cash.

For that reason, RoboCop 2014 is worth seeing.  It is a science fiction movie with a horror movie twist.  It has the thrills of an action movie, but also the chill of a scary movie that has a ring of truth to it.


Posted by Leroy Douresseaux at 7:56 AM