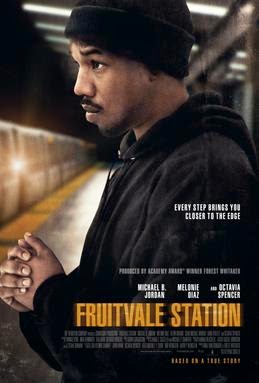 Fruitvale Station is a 2013 drama from writer-director Ryan Coogler.  A docu-drama and quasi-historical film, Fruitvale Station is a dramatization of the last day in the life of Oscar Louis Grant III, a real-life African-American man who was shot to death by a police officer.  Actor Forest Whitaker is one of the film’s producer (although he does not appear in the film), and Harvey Weinstein is one the film’s executive producers, although he does receive a screen credit in the film as such.

Oscar Grant, a 22-year-old San Francisco Bay Area resident, and his friends were traveling on a Bay Area Rapid Transit (BART) train during the early hours of New Year’s Day 2009.  After a fight on the train, Grant and his friends were detained by BART Police officers at Fruitvale Station in Oakland, California.  While being restrained Grant, who was lying face down and allegedly resisting arrest, was fatally shot by BART Police officer Johannes Mehserle.  Grant was pronounced dead around 9 a.m. that morning at Highland Hospital in Oakland.

The incident at the train station is the basis of Ryan Coogler’s Fruitvale Station.  The film follows Oscar Grant (Michael B. Jordan) from the early morning of New Year’s Eve 2008 to his death.  The film examines his relationship with his girlfriend, Sophina (Melonie Diaz), who is the mother of his child, Tatiana (Ariana Neal).  The film also pays particular attention to Grant’s close relationship with Tatiana and his relationship with his mother, Wanda (Octavia Spencer), which had improved since Oscar’s stint in jail.  By illustrating the energy he brought to life, the film celebrates how much Oscar meant to his family and friends.

I often dread watching films based on real-life events when I know that the lead character died or was killed.  It took me three days to watch Fruitvale Station because I knew the heartbreak that was coming, and this film is indeed poignant and heartbreaking.  It eulogizes Oscar Grant, while simultaneously mourning a unique soul lost through senseless death.  By portraying Oscar’s relationships, Coogler emphasizes what a tragic loss Oscar was for his friends and family.  However, Coogler makes that sense of loss feel genuine in ways that films about real life people often do not.  Some movies about the senseless killing of person can make the viewer feel outrage.  Fruitvale Station simply cause hurt deep in the soul.

Michael B. Jordan as Oscar and Octavia Spencer as his mother, Wanda, give tremendous performances.  Spencer (who is one of the co-executive producers of this film) shows that she can build characters that seem real right down to their souls.  I can see why many thought that she would get an Oscar nod for her work here, which she ultimately did not.

Jordan is so good; it is as if he disappeared and then, reappeared as the real Oscar Grant.  After such a performance, people will obviously think that the sky is the limit for this bright and talented young actor.  Because of his performance, I don’t think I could watch Fruitvale Station again.  I cannot let Jordan, Spencer, and Coogler break my heart and make me cry again.