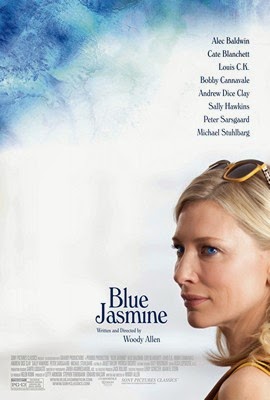 Blue Jasmine is a 2013 drama written and directed by Woody Allen.  The film follows a rich Manhattan socialite, fallen on hard times, who moves to San Francisco to live with her sister, with her troubles in tow.

Jasmine (Cate Blanchett) was a New York socialite, married to hugely successful real estate developer, Hal Francis (Alec Baldwin).  Jasmine, whose real name is Jeanette, leads a life of luxury and leisure, but Hal’s business is based on fraud.  After Hal is sent to prison, she loses everything (home, money, status, etc.).  Jasmine travels to San Francisco where she will move in with her sister, Ginger (Sally Hawkins), a single mother of two boys, Matthew (Daniel) and Johnny (Max).

Jasmine’s arrival is an imposition, as Ginger had planned to allow her fiancé, Chili (Bobby Cannavale), to move in with her.  Hal’s fraudulent dealings also cost Ginger and her ex-husband, Augie (Andrew Dice Clay), a lot of money and financially ruined them.  Deeply troubled and in denial about the past, Jasmine looks fabulous, but her looks hide the fact that she isn’t bringing anything good to her new home.

Blue Jasmine is not only one of Woody Allen’s best screenplays of the last decade, but it also features some of his best characters ever.  In a way, their motivations and emotions are so obvious that they could be described as wearing their hearts on their sleeves.  On the other side of that, each character is also inscrutable, because what goes on inside their heads (thinking and thought processes) is largely a mystery.

Jeanette “Jasmine” Francis is the most inscrutable of all, and as Jasmine, Cate Blanchett gives what may be the best performance of her career.  That says a lot in a career full of incredible performances.  Jasmine is that rare instance when an actor brings to life a fully realized character that seems to devour everything that the actor is.  Blanchett also makes sure that there are no easy answers to Jasmine, who denies the past, but is inexorably trapped in it.

Sally Hawkins as Ginger manages to keep up with Blanchett, and in every scene that Ginger shares with Jasmine, Hawkins makes her character just as compelling.  Prepare to be surprised by the multi-dimensional performance by Andrew Dice Clay as Ginger’s ex-husband, Augie.  I was a huge fan of Clay when he was a blazing, red-hot, stand-up comic in the late 1980s and early 1990s, but his heartbreaking turn as the deeply wounded Augie is still a surprise to me.

I have read that some critics see Blue Jasmine as Woody Allen’s take on Tennessee William’s legendary play, A Streetcar Named Desire, as they share similar elements.  If this is true, Allen made Blue Jasmine worthy of being compared to the masterwork that is William’s play.  Even movie audiences who are not usually fans of Allen’s films should see the exceptional Blue Jasmine.