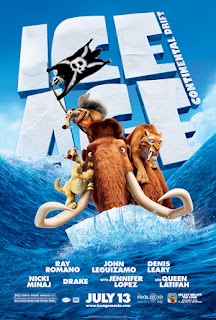 The subject of this movie review is Ice Age: Continental Drift, a 2012 computer-animated film from Blue Sky Studios and 20th Century Fox. This comedy-adventure movie is the fourth film in the Ice Age series. Continental Drift follows the original Ice Age trio of Manny, Diego, and Sid after they are separated from the rest of the herd.

As Ice Age: Continental Drift begins, the herd is living in peace in the vast land they call home. Manfred “Manny” the mammoth (Ray Romano) is at odds with his teenage daughter, Peaches (Keke Palmer), with mother, Ellie (Queen Latifah), caught in the middle. Family strife isn’t the only rumbling in the land. The continents are dividing, and an earthquake separates Manny, Sid the giant sloth (John Leguizamo), and Diego the saber-toothed tiger (Denis Leary) from Ellie and the rest of the herd.

Lost at sea, Manny, Sid, and Diego begin an epic journey to reunite with the herd, their family. Standing in their way are a vicious primate, Captain Gutt (Peter Dinklage), and his band of pirates, who sale the seas using a floating iceberg as their ship. Meanwhile, the prehistoric squirrel/rat, Scrat (Chris Wedge), continues to chase that acorn.

I expected Ice Age: Continental Drift to be more of the same when it comes to the Ice Age franchise, but that is not a bad thing, anyway. The Ice Age films have been entertaining, if not great, because the franchise’s shtick is both funny and familiar. Each Ice Age film is basically a prehistoric, domestic situation comedy featuring talking animals, and the situation always involves some adventurous mission.

Still, Continental Drift offers its own inventive high points: icebergs as pirate ships, a group of tricky sirens, and Scrat’s treasure hunt come to mind. Captain Gutt and his pirates are, in my estimation, the series’ scariest villains to date, with Peter Dinklage giving a wonderful, layered voice performance. The film actually has a number of good voice performances. Wanda Sykes delivers her funniest voiceover as Sid’s Granny, and Jennifer Lopez is just shockingly good as Shira, a saber-toothed tiger and one of Gutt’s crew.

Continental Drift underutilizes some characters, such as Louis the mole hog (Josh Gad), Peaches’ love-interest-of-sorts. Sometimes, the film is too laid back, but overall Ice Age: Continental Drift is quite good. I found myself laughing at and with the characters, and ultimately, I cared enough to cheer them on.

Posted by Leroy Douresseaux at 7:39 AM