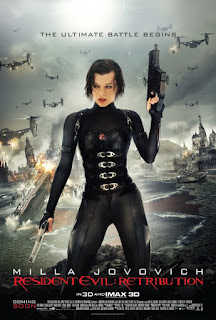 Resident Evil: Retribution is a 2012 science fiction-action film. It is the fifth installment in the film franchise based upon the Capcom survival horror video game series, Resident Evil. This film is a direct sequel to the fourth movie, Resident Evil: Afterlife.

After the events depicted in Afterlife, Alice (Milla Jovovich) finds herself in the clutches of the Umbrella Corporation and being interrogated by her former ally, Jill Valentine (Sienna Guillory). Alice isn’t sure what is real, as she starts encountering old allies like Carlos Olivera (Oded Fehr) and Rain Ocampo (Michelle Rodriguez).

Even more surprising, an enemy claims to be a friend and declares that he has already initiated a plan to free Alice from the clutches of Umbrella. Alice is trapped in Umbrella Prime, and a five-man strike team is coming to her rescue. More than just Alice’s life is at stake, however, as she becomes the guardian of a hearing-impaired little girl named Becky (Aryana Engineer). Now, Alice is determined that nothing stops her: not zombie hordes, Las Plagas zombies, monsters, or even lickers.

Over the years, I have read many movie reviews in which the writers described action movies, especially ones they didn’t like, as video game movies. Because it is based on a video game, Resident Evil: Retribution is a video game movie, but that’s not the only reason it is. With its fire-fights, hand-to-hand combat, car chases, shootouts, monsters, science fiction elements, and explosions, Resident Evil: Retribution is a video game doing a decent impersonation of an actual movie.

Retribution isn’t a bad movie, but the acting is poor. The script is confusing. The plot barely has a pulse. This movie is about something, but not much other than action scenes. So what is the plot? Alice has to escape? There is some human interest by throwing in a child that the female action hero must save, similar to the surrogate mother-daughter dynamic in James Cameron’s Aliens (1986).

Still, the action scenes are good, especially after the movie crawls out of the hole that is the first twenty minutes or so runtime. The special effects and fight choreography save a mediocre story. Visually, Resident Evil: Retribution is pretty, but it feels like an empty installment in what has been a good franchise.

Posted by Leroy Douresseaux at 6:43 AM