Review: Berserk: The Golden Age Arc 1 – The Egg of the King 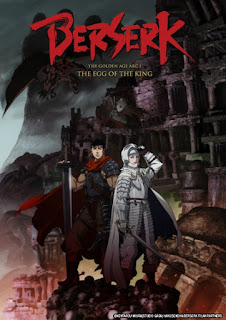 Berserk: The Golden Age Arc 1 – The Egg of the King is a 2012 Japanese animated film (anime) from anime director Toshiyuki Kubooka. Kubooka directed the “Working Through Pain,” segment of the 2008 direct-to-DVD film, Batman: Gotham Knight.

Berserk: The Golden Age Arc 1 is based on Berserk, a Japanese manga (comic book) series written and illustrated by Kentaro Miura. Berserk is set in a fantasy world that is modeled on medieval Europe. The story centers around the two characters, Guts (Marc Diraison), an orphaned mercenary, and Griffith (Kevin T. Collins), the leader of a mercenary group called the Band of the Hawk.

As the story begins, Guts is a mercenary on the loosing side of a battle, but he turns the tide of that battle when he defeats the Goliath-like, Bazuso (Russell Nash). This victory earns Guts a contest of skills with the Band of the Hawk, a band of mercenaries so feared that they are called the “grim reapers of the battlefield. The group’s leader, Griffith, convinces Guts, a loner, to join his band of mercenaries.

Soon, the Band of the Hawk is hired by the King of Midland to fight in the Midlanders’ war against their enemy, Chuder. Guts becomes indispensable to Griffith, but a monstrous fighter named Nosferatu Zodd has something to tell Guts about the strange jewel-like object Griffith wears around his neck. It is called the Egg of the King – the Crimson Behelit. And it has the power to shape Guts’ destiny.

When I first looked at the DVD box art for Berserk: The Golden Age Arc 1 – The Egg of the King, I thought that the movie would not amount to much. I was delightfully surprised; in fact, by the end of the movie, I wanted more. As it is set in a medieval Europe-inspired fantasy world, the viewer would expect violent battle scenes and sword fighting, and the film delivers that. The fights and battles are well designed and staged, and the fight between Guts and Nosferatu Zodd features a 360-degree spin of the camera that recalls the bullet time effects in The Matrix. There is a lot of violence, and some of it shocked even me, who, dear reader, has seen some appalling, outrageous, and disgusting depictions of violence over my lifetime as a film semi-fanatic.

The Egg of the King is simply full of surprises. Another of the surprises is the drama. The movie is almost stiff in the way the film depicts the characters’ motivations and conflicts, as if this were a British film of manners. The character drama, however, is intense, and demands that the viewer engage with various conflicts, motivations, and intrigue. Guts and Griffith are appealing characters, and the palace intrigue and court conspiracies are engrossing. The story grasps with many themes, including those of friendship and the nature of good and evil in humans, and the question of why men are so bloodthirsty often arises.

Berserk: The Golden Age Arc 1 – The Egg of the King is simply an all-around, high-quality, exceptional film. As an anime, this movie seems to be off in its own corner. It seeks to be more than just another fantasy war movie, and that it is.