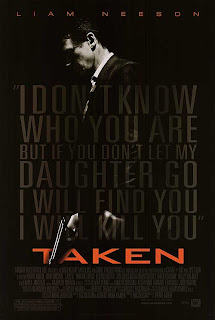 The subject of this movie review is Taken, a 2008 French thriller produced by Luc Besson and starring Liam Neeson. The film was released in January of 2009 in the United States. Taken follows a retired CIA agent through Paris as he tries to find his kidnapped daughter.

Former CIA operative Bryan Mills (Liam Neeson) wants to be closer to his daughter, Kim (Maggie Grace), whom he calls “Kimmie.” The 17-year-old lives with her mother, Lenore (Famke Janssen), and her wealthy stepfather, Stuart (Xander Berkeley). Bryan has a rocky relationship with Lenore, who pressures him not to be overprotective of Kim. That’s why Bryan reluctantly signs a permission slip that allows Kim to travel to Paris, France with her older friend, Amanda (Katie Cassidy).

Not long after the girls arrive in Paris, they are kidnapped by a group of men. Bryan races to Paris to find Kim, but her kidnappers are ruthless, murderous men who hide in Paris’ shadowy criminal underworld. Now, he must rely on old skills as he races through Paris’ darker districts to save his daughter before she disappears forever. Heaven help anyone who gets in his way.

I had put off seeing Taken for about four years, and, now that I’ve seen it, I can say that it easily surpassed my expectations. Taken is a terrific thriller. It is a feisty little revenge flick that plays like a big-time, big studio thriller. I think that there are a few holes in the plot and even some things that the characters do in the movie that poke credulity. It is not enough to stop me from enjoying the movie.

Perhaps, this film was not meant to be a Liam Neeson vehicle, but it became one because of Neeson’s fierce performance. He is genuine as a daddy both desperate to make up for lost time with his daughter and resolved to let no one and no thing get in the way of him finding his stolen child. Neeson does the best killer-robot-like-action dude. When other actors take on that kind of character, they can sometimes seem too cold and/or too stiff: either inadvertently (Wesley Snipes in Blade: Trinity) or because of limited acting range (Chuck Norris – pick a movie).

I must also say that, once again, the Luc Besson slick-shiny-cool action movie generator has produced another pop movie hit. Director Pierre Morel plows through this script’s inanities like a chef determined to make the best meal that he can out of Big Mac ingredients. His resulting dish, Taken, is actually quite tasty.

Posted by Leroy Douresseaux at 6:48 AM