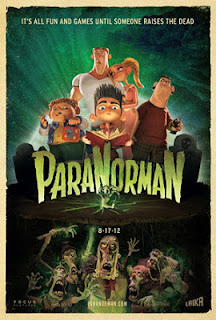 ParaNorman is a 2012 American, 3D, stop-motion animated, comic-horror film. The film is a production of Laika, the stop-motion animation studio behind the 2009 film, Coraline. ParaNorman focuses on a misunderstood boy, who talks to ghosts, and his quest to save his town from a centuries-old curse.

Not many people in the town of Blithe Hollow, Massachusetts seem to understand or even like 11-year-old Norman Babcock (Kodi Smit-McPhee), except his dear mother, Sandra (Leslie Mann), of course. Norman can talk to ghosts. This claim infuriates his father, Perry (Jeff Garlin), because he thinks his son is too weird, and it annoys his sister, Courtney (Anna Kendrick), who is embarrassed by her brother. Norman even has a classmate dedicated to bullying him, the break dancer wannabe, Alvin (Christopher Mintz-Plasse). Norman does have one friend, a chubby, eccentric kid named Neil Downe (Tucker Albrizzi).

Oh, there is one other person interested in Norman. That would be the town crazy, Mr. Prenderghast (John Goodman), who is also Norman’s uncle. He claims that Norman is the only person who can save the town from a centuries-old curse put upon it three hundred years ago by a vengeful witch. Pursued by zombies, Norman races to stop the curse with only Neil, a reluctant Courtney, and Mitch (Casey Affleck), Neil’s brother, by his side. But stopping the curse means having the right information/the real story, and Norman is having trouble getting that.

ParaNorman is not only one of the best animated films of the year, but it is also one of 2012’s best movies. This film looks like a Tim Burton movie, but is darker and less whimsical than most of Burton’s movies; ParaNorman is probably more in line and closer in tone with Burton’s Sleepy Hollow (1999).

One of my college professors said that books which contained controversial ideas often ended up in the children’s literature section, To Kill a Mockingbird and Lord of the Flies, being examples she used. ParaNorman is kind of like that; in fact, it is like one of those children’s classics (film or storybook) with something to say. It runs the gamut of themes and ideas: the destruction of revenge, bullying, parental acceptance, the cycle in which parents pass on their fears and prejudices to their children or even project those onto their children, the fear of being different, how easy it is for a person to isolate himself because he is persecuted for being different, the mob mentality, the quest for redemption, etc. ParaNorman has so many ideas and themes that I lost count. It does not aspire to be more than a kid’s movie; it just wants to be more than the average children’s movie.

The film is such a feast of dark colors and fantastic visual elements that it is easy to miss the substance. The stop-motion animation and production values in ParaNorman exceed Coraline; it’s not even close. The character design alone is way ahead in terms of imagination and diversity than many animated feature films. The characters are caricatures of real-life human body types, but in an amusing way that celebrates all the big hips, thunder thighs, scrawny necks, big butts, fat bodies, etc. without being cruel for the sake of cheap laughs.

There is a lot more to say, but I don’t want to run on (longer than I usually do). This hand-crafted movie is a miracle. It celebrates being different, but also enjoying being different from other people. There is a surprise reveal about one of the characters near the end of the film that makes ParaNorman extra, extra-special.