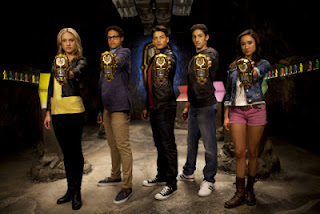 LOS ANGELES--(BUSINESS WIRE)--Saban Brands and Nickelodeon today announced Power Rangers, the number one show with Boys 2-11 and Boys 6-11 across all TV in its time period (Source: NMR, 4Q12 Premieres, Sat 1p-130p, Live + SD), will debut its all-new season, Saban’s Power Rangers Megaforce, on Saturday, Feb. 2, at 1 p.m. (ET/PT) on Nickelodeon. Power Rangers Megaforce marks the 20th anniversary of the franchise and kicks off its year-long celebration. Following the premiere, the show will air regularly Saturdays at 1 p.m. (ET/PT) on Nickelodeon, with encores airing Saturdays at 8 a.m. ET on Nicktoons.

“We are delighted to continue our partnership with Nickelodeon and introduce fans everywhere to a MEGA-installment of the 20 year franchise,” said Elie Dekel, President of Saban Brands. “Our collaboration will make the launch of the all new season, Power Rangers Megaforce, as strong as ever.”

Power Rangers Megaforce introduces a plot line that is sure to captivate audiences. The new series features Gosei, a supernatural guardian who for centuries has protected the earth with his robotic aide, Tensou. But when the evil Warstar aliens begin their massive invasion, Gosei calls upon five teenagers with talent and attitude to form the ultimate team...the Power Rangers Megaforce!

When the teens morph into Power Rangers, they gain superhuman strength, agility, and mastery over martial arts. With the aid of special Power Cards, the teens are able to control the earth’s elements to use in their defense, from crushing rock slides to powerful floods. The Power Cards also give them access to amazing combat moves, hi-tech weapons, massive Zord vehicles and the ability to combine these Zords into gigantic Megazord robots to help them battle their enemies. But defending the earth from the invading Warstar aliens is just the beginning of their heroic journey to save the world.

The all new Megaforce Rangers include Troy (Andrew Gray), the Red Ranger who is the new kid in town that loves martial arts; Noah (John Mark Loudermilk), the Blue Ranger who has a thirst for knowledge and a love for science; Gia (Ciara Hanna), the Yellow Ranger who is the prettiest, most successful yet toughest girl at school; Emma (Christina Masterson), the Pink Ranger who is a compassionate and charitable teen and Jake (Azim Rizk), the Black Ranger who is a fearless, fun-loving teen with a passion for soccer.

In addition to the series premiere, Saban Brands is launching its in-school emPOWER program for the third consecutive year in a row. The emPOWER program teaches kids and families how to put the Power Rangers values of teamwork, confidence, health and physical activity into action. The program provides free in-school healthy eating and exercise curriculum resources to more than 100,000 teachers annually, as well as resources, recipes, and tips online for parents through the website www.empower.powerrangers.com.

Beginning Feb. 18, fans can visit Nick.com to play the newest mini game, Power Rangers Megaforce: Never Surrender. In Never Surrender, players help their favorite rangers take on the pesky Loogies and fearsome Warstar Aliens. They can also form their own teams of two by choosing the ranger they wish to play with; from there they’ll battle their way through waves of oncoming enemies in familiar environments from the show. Each ranger has their own specialized combo attacks, augmented attacks and a team up Megaforce attack – along the way, players collect Gosei coins in order to redeem Megaforce Power Cards that grant their rangers enhanced weapon and elemental abilities.


About Saban’s Power Rangers Megaforce
Power Rangers Megaforce is the all-new season of the No.1 live-action kids action series on television. The new series, which airs Saturdays at 1p.m. (ET/PT) on Nickelodeon, delivers mega action, humor, excitement and entertainment, in addition to the core themes of friendship, teamwork, fitness, and helping others. Power Rangers Megaforce premieres as Saban Brands celebrates the 20th Anniversary of the Power Rangers franchise, which is helmed by Haim Saban, who created and produced the original Mighty Morphin Power Rangers series in 1993. Following its introduction, Power Rangers quickly became the most-watched children’s television program in the United States. The series followed the adventures of a group of ordinary young people who “morphed” into superheroes. It was seen in more than 60 countries, translated into numerous languages, and was a mainstay in the most prominent international children’s programming blocks. SCG Power Rangers LLC, which licenses and merchandises the Power Rangers brand, is an affiliate of Saban Brands. For more information, visit www.powerrangers.com.

About Saban Brands
Formed in 2010 as an affiliate of Saban Capital Group, Saban Brands (SB) was established to acquire and develop a world-class portfolio of properties and capitalize on the company’s experience, track record and capabilities in growing and monetizing consumer brands through content, media and marketing. SB applies a strategic transmedia management approach to enhancing and extending its brands in markets worldwide and to consumers of all ages. The company provides full-service management, marketing, promotion and strategic business development for its intellectual properties including comprehensive strategies unique to each brand, trademark and copyright management and enforcement, creative design, retail development, direct-to-consumer initiatives and specialized property extensions. SB is led by a superior management team with decades of experience in media, content creation, branding, licensing, marketing and finance. For more information, visit www.sabanbrands.com.

About Nickelodeon
Nickelodeon, now in its 33rd year, is the number-one entertainment brand for kids. It has built a diverse, global business by putting kids first in everything it does. The company includes television programming and production in the United States and around the world, plus consumer products, online, recreation, books, and feature films. Nickelodeon’s U.S. television network is seen in almost 100 million households and has been the number-one-rated basic cable network for 18 consecutive years. For more information or artwork, visit www.nickpress.com. Nickelodeon and all related titles, characters and logos are trademarks of Viacom Inc. (NASDAQ: VIA, VIAB).