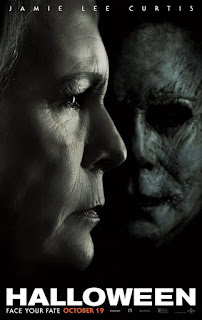 Halloween is a 2018 slasher-horror film from director David Gordon Green.  It is the eleventh installment in the Halloween film series and is a direct sequel to Halloween, the 1978 film that was the first in the series.  Halloween 2018 follows a post-traumatic woman as she plots the final showdown with the masked killer who has haunted her ever since he killed her friends and almost killed her forty years ago on Halloween night.

Halloween opens on October 29, 2018.  Michael Myers (Nick Castle) has been institutionalized at Smith's Grove Psychiatric Hospital for 40 years following his killing spree in Haddonfield on October 31, 1978.  Myers is being prepared for transfer to a maximum security prison, but the following day, as he is being transferred, Michael manages to escape and returns to Haddonfield.

In Haddonfield, Laurie Strode (Jamie Lee Curtis) is still living in fear of Michael Myers 40 years later.  She is drinking heavily and rarely leaves her fortified house deep in the woods.  Laurie is estranged from her adult daughter, Karen Nelson (Judy Greer), whom the state took away from Laurie when Karen was 12.  Karen's husband, Ray Nelson (Toby Huss), does not want Laurie around, but their daughter, Allyson (Andi Matichak), does keep in touch with her grandmother, Laurie.

When Laurie discovers that Michael has escape, she springs into action.  Deputy Frank Hawkins (Will Patton), who arrested Michael in 1978, seems to be the only other person who truly understands how dangerous Michael Myers is.  As they try to convince Laurie's family and the rest of Haddonfield that Michael (James Jude Courtney) is back, Laurie prepares for her final confrontation with Michael.

Halloween 2018 is called a “direct sequel” to the 1978 original, although I think the 2018 film is a hybrid that is a combination sequel, remake, reboot, and re-imagining of various elements of the Halloween film franchise.  If anything Halloween 2018 is inspired by Halloween 1978 and by the fables and culture surrounding it.

That would explain why Halloween 2018 seems incomplete in many ways.  Initially, the film presents Michael Myers as a man.  When he dons the mask, Michael becomes “The Shape,” which was how the original film's screenplay referred to him.  Ultimately, however, Myers is a slasher film villain and when he starts dispatching the denizens of Haddonfield, he becomes what he must be – a killing machine.  He kills so many other characters in this film that it just becomes pointless.  Apparently, Myers really wants to kill Laurie Strode, but while he strolls on over to his inevitable showdown with her, he must think why not kill a person or two … or three … or four.

What is this movie about, really?  I will freely admit that it is one of the most intensely scary movies that I have seen in recent years.  So is it about the post-traumatic woman that Laurie Strode is?  Is it about the multi-generational affects of violence?  Is it about Laurie vs. Michael, and if it is, why is Laurie vs. Michael a thing?  After all, Halloween 2018 “retcons” out the fact that Laurie Strode and Michael Myers are siblings, as movie audiences learned in 1981's underrated Halloween II.

The problem is that the original Halloween was a film that director John Carpenter wanted to make, while Halloween 2018 is something birthed by Halloween the cash cow film franchise.  Although, Halloween 2018 is very well directed by David Gordon Green, it is not cinematic art; it is simply film as entertainment product.

Halloween 2018 sells a familiar product to audiences, and this product is a scary movie that is supposed to deliver scares, which, once again, I will admit that it does indeed deliver.  The writers and director really deliver the horror movie wheelhouse tropes, but do so with the cost being truncated character drama and story development.  This film has some quality actors, led by Jamie Lee Curtis, and some quality acting, for instance Haluk Bilginer as Dr. Ranbir Sartain (an underutilized character).  But the actors' efforts with these characters feels abbreviated … because the film has to focus on Michael killing lots of characters in the most gruesome fashion.  Only child actor, Jibrail Nantambu, as the babysat kid, Julian Morrisey, makes the most of his character, and that is because his character has too little screen time to infer with Michael's killing spree.

However, I must state that if you, dear readers, want to be scared, Halloween 2018 will scare you.  It is a genuinely chilling, creepy, and scary film.  But I also want to make sure that I emphasize that the true “direct sequel” to Halloween 1978 is 1981's Halloween II.  Halloween 2018 was meant to be and is an effective cash cow, and if it were more that that, I would give it an even higher grade.


The text is copyright © 2020 Leroy Douresseaux. All Rights Reserved. Contact this blog or site for reprint syndication rights and fees.

Posted by Leroy Douresseaux at 4:05 PM