Review: "Scooby-Doo! and the Gourmet Ghost" is a Happy Meal 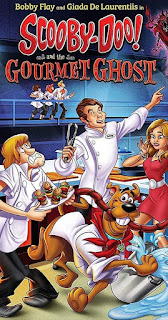 Scooby-Doo! and the Gourmet Ghost opens in Newport Cove, Rhode Island, the year 1780.  Local chef and Revolutionary War hero, Chef Edward DuFlay (David Kaye), delights his neighbors with a gift, but later, disappears not long after he returns to his home and place of work, the Rocky Harbor Inn.  The last thing the townsfolk here is Chef DuFlay yelling “the Red Ghost, the Red Ghost!”

Inside the inn, Bobby informs the gang that he has remodeled Rocky Harbor Inn and has changed its name to Rocky Harbor Culinary Institute.  It is a state-of-the-art kitchen fantasy camp designed to make cooking easy and fun.  It has a high-tech kitchen where “Rocky” (Grey Griffin), an interactive computer program, keeps the kitchen humming.

But all is not fun and games and eating great food.  The legendary “Red Ghost” is still haunting Rocky Harbor Inn, and apparently wants to destroy it.  And there seems to be some unpleasantness tied to the memory of Fred and Bobby Flay's ancestor, Chef Edward DuFlay.  Can Mystery Inc. solve this latest supernatural mystery before Bobby Flay loses everything he has worked so hard to create with Rocky Harbor Culinary Institute?

Scooby-Doo! and the Gourmet Ghost is one of the best Scooby-Doo! direct-to-DVD animated films that I have seen since I started watching the series on a regular bases a little over a decade ago.  I think the reason that I like it so much is that real-life celebrity chefs and television personalities, Bobby Flay, Giada De Laurentiis, Marcus Samuelsson, and Maya Haile (all playing themselves), bring some fresh ingredients to this series.

Writer Tim Sheridan also offers a buffet of fresh and tasty subplots that brings out the flavor of the main plot (solving the mystery of the Red Ghost).  The animation is especially good, and the directing and editing create a fast-paced, but thoughtful film, full of both engaging mystery and zany action.  I highly recommend Scooby-Doo! and the Gourmet Ghost to fans of the series and to fans of Scooby-Doo!