Review: "The Addams Family" Gives the Middle Finger to Assimilation 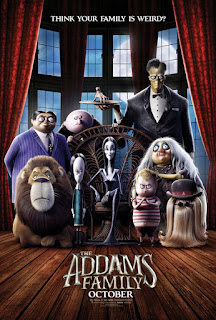 The Addams Family is a 2019 computer-animated comedy from directors Conrad Vernon and Greg Tiernan.  The film is based on the characters created by The New Yorker cartoonist, the late Charles Addams (1912-1988).  The Addams Family the movie focuses on an eccentrically macabre family and their interactions with the denizens of a colorful, but bland suburb.

The Addams Family opens as Gomez (Oscar Isaac) and Morticia (Charlize Theron) prepare to marry in front of their eccentric, odd, and weird family members.  However, the people of the local town despise the macabre nature of the happy couple and their family, and chase them away.  Luckily, the newlywed Morticia and Gomez and their companion, Thing (sentient hand), escape to New Jersey.  There, the trio finds two things.  The first is a home in an abandoned and decaying manor-style building that was once an asylum, and the second is a butler in the hulking Lurch (Conrad Vernon).

Thirteen years later, Morticia and Gomez have two children – a precocious and mordacious, Wednesday (Chloe Grace Moretz); and an explosives-loving son, Pugsley (Finn Wolfhard).  The family is in kind of a state of crisis.  Gomez struggles as he prepares Pugsley for his upcoming “Sabre Mazurka,” a rite of passage that every male Addams family member must pass.  Morticia struggles to keep Wednesday from wanting to experience the world outside the mansion, which includes the girl's desire to go to school.

Elsewhere, reality TV host, Margaux Needler (Allison Janney), is in the middle of building a perfect planned community that she is calling, “Assimilation.”  This is supposed to be the highlight of her television series' season finale.  However, when she discovers that the Addams' dilapidated home overlooks Assimilation, Margaux is determined to give their home an extreme makeover, whether they like it or not.  Meanwhile, many members of the Addams clan are gradually arriving in order to celebrate Pulley's big day.

The latest media iteration of these characters, the computer-animated The Addams Family, borrows elements from the Addams Family media that has come before it.  Here, the illustrative and graphic design of the characters and their world recall both Addams cartoons and the 1973 TV series, although I find the way this film's Morticia and Gomez look to be a little off-putting.  Overall, however, I find the look of this film visually appealing, and I think the Addams family's relatives are an interesting lot of inventively designed characters.

One thing that I think The Addams Family 2019 has over The Addams Family 1990s film franchise is that this animated film gets it right in the way it contrasts the Addams family against the outside world.  Charles Addams' best cartoons juxtaposed his creepy characters and their playfully insidious actions with the normal human world.  Much about the 1990s films was insular and did not send the family out into the normal world.  The second film did, at least, send Wednesday and Pugsley to summer camp, which is why I think the second film is much better than the first.

By sending the Addams down the mountain to meet their neighbors in this film, the filmmakers get to play with themes and ideas of individuality, conformity, acceptance, change, and family, which makes this movie more than just another cartoon romp featuring a bunch of strange characters.  Ultimately, The Addams Family 2019 emphasizes that a family can be made up of both different people and of people who live and act differently from the rest of the family.

This film's standout voice actor/character pairs are Chloe Grace Moretz as Wednesday and Allison Janney as Margaux Needler.  Nick Kroll delivers a killer turn as Uncle Fester, and Bette Midler takes what is a small role in Grandmama Addams and makes it feel like a major part.  Jenifer Lewis, with her commanding voice and delivery, turns Great Auntie Loom into a character that steals scenes.

The Addams Family 2019 is my favorite media adaptation of “The Addams Family” characters outside of the 1960s and 1970s.  I highly recommend this film to fans of the characters.  It does take a while for the film to get going – about 20 minutes into the story, but it manages to be sweet, charming, heartwarming, and, of course, macabre – the way it should be.

Posted by Leroy Douresseaux at 4:59 PM