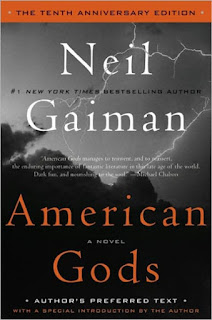 American Gods is a 2001 fantasy novel by Neil Gaiman (author of The Sandman comic book series).  In 2002, the book won several “Best Novel” awards from organizations that honor fantasy fiction, including the Hugo, Nebula, and Bram Stoker Awards.  The novel centers on a taciturn and mysterious protagonist caught in a struggle between the gods of the old world and the new gods of America.

In celebration of the novel’s tenth anniversary, William Morrow published American Gods: The Tenth Anniversary Edition (Author’s Preferred Text) in June 2011.  This edition contains an additional 12,000 words and is the first time that this version of the text has been made widely available.  Gaiman also provides an introduction to this edition in which he explains the origins and development of the novel.

The premise of American Gods is that gods, mythological beings, spirits, and figures of legend, folklore, and fairy tales exist because people believe in them.  Through their beliefs, immigrants brought these gods and beings from the Old World to the new world of America.  Over time, the immigrants’ descendants either forgot the gods or their belief in their ancestors’ gods waned.  Now, out of America’s obsession with media, celebrity, technology, and even drugs (among other things) sprang new gods.

The story centers on an enigmatic figure named Shadow, who has just been released from prison after serving three years.  He can’t wait to get back to his wife, Laura Moon, but tragedy strikes.  With nothing left to which he can return, Shadow accepts a job from a beguiling stranger who calls himself Mr. Wednesday.  A charming rogue who can get ladies in bed with ease and a trickster extraordinaire, Wednesday seems to know a lot about Shadow, the man who becomes his bodyguard, driver, and general errand boy.  Wednesday takes Shadow on a long, strange trip across America, as Wednesday attempts to recruit some of the old gods to his cause.  But only Shadow can uncover the whole story about “the Storm,” the war between the gods.

It is a bit of everything and is all over the place, but that makes me wonder if this novel was Neil Gaiman’s attempt at the great American novel.  People think of the United States as a melting pot, in which people from different nationalities, backgrounds, and cultures blend into a new ethnic group, the American.  In reality, however, some people just don’t “melt” very well, and it is obvious that they can never physically look like what many consider to be an American – a white person.  America may be a melting pot, but it is equally a mosaic, a nation made of different pieces that have broken off from old world cultures and other nationalities. [Some would argue that the United States Constitution is the only thing that unites us.]

American Gods is a mosaic novel made from pieces broken off other stories, or maybe it is a melting pot of different kinds of fiction – the American novel for a melting pot/mosaic nation.  Gaiman reconciles the melting pot and mosaic of America by bringing them together and recognizing that American culture is about the tension between old and new.  It may be a jumble, but they can live side by side.  All that we need recognize is the forces that would tear us apart and use our strife to benefit themselves.  We can be different and even not united, but all be American.

Frankly, I did find a few sections of this novel to be dry and even dull, but the further you go into the novel, the tighter its hold on you.  Gaiman fills American Gods with inventive scenarios, imaginative characters, and ingenious concepts, although the new American gods are mostly flat and vague characters.  Still, it feels like this novel reinvigorated the fantasy genre, making fantastic literature that is not about escapism.  American Gods speaks of the soul of this country by delving into the dreams and the beliefs of the people and the supernatural that call this great land home.

I READS YOU RECOMMENDS:  Fans of Neil Gaiman will want to read American Gods: The Tenth Anniversary Edition.