Review: "Scooby-Doo! and WWE: Curse of the Speed Demon" a Cool Cartoon 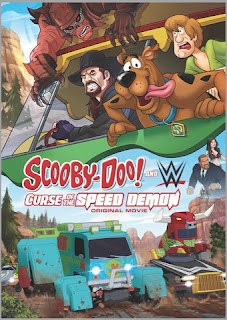 Scooby-Doo! and WWE: Curse of the Speed Demon is a 2016 straight-to-video animated comedy mystery.  It is the 27th animated movie in the Scooby-Doo straight-to-video series from Warner Bros. Animation.  This series began in 1998 with Scooby-Doo on Zombie Island.  In Curse of the Speed Demon, Mystery Inc. is hired to solve the mystery of a phantom racer plaguing a WWE road race.  This film is also a co-production between WWE Studios and Warner Bros. Animation.

The race's participants are WWE superstars like The Undertaker and Dusty Rhodes, Stephanie McMahon and Triple H, to name a few.  During a preliminary round of the race, a demon racer known as “Inferno,” disrupts the race, injuring Rhodes.  Needing a new partner, The Undertaker takes on Shaggy (a.k.a. “Skinny Man”) and Scooby-Doo (a.k.a. “Dead Meat”).  The trio becomes “Team Taker” and races in “The Scoobinator.”

I have failed you, dear readers.  I cannot explain why I like Scooby-Doo! and WWE: Curse of the Speed Demon.  It is not a great movie, but I find quite entertaining.  What are some of the things that I like.

I am not a fan of WWE, but I found these cartoon versions of select WWE superstars likable, especially The Undertaker.  The cartoon Stephanie McMahon seems personable.  I found myself attracted to “Team Taker” and their racing vehicles.  All the elements that make up monster/villain Inferno make him a good bad guy.

Of course, when it comes down to it, I am a lifelong fan of Scooby-Doo and the rest of the Mystery Inc. gang.  I don't really want to go to long without seeing them, and yes, I have come across some poor Scooby-Doo direct-to-DVD films.  Scooby-Doo! and WWE: Curse of the Speed Demon is not one of them.

The text is copyright © 2017 Leroy Douresseaux. All Rights Reserved. Contact this site for syndication rights and fees.