"The Legend of Zelda: Four Swords" Manga Coming in July 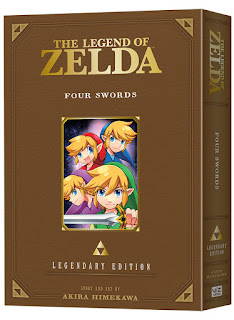 The LEGENDARY EDITIONS adapt Akira Himekawa’s 10-volume manga series based on the classic Nintendo® role playing, puzzle-solving, action video game into a line of deluxe omnibus 2-in-1 editions that each feature new cover art and color illustrations. THE LEGEND OF ZELDA: FOUR SWORDS –LEGENDARY EDITION– is the fifth release in the LEGENDARY EDITION series. FOUR SWORDS is rated ‘A’ for All Ages and will carry a print MSRP of $17.99 U.S. / $24.99 CAN.

In FOUR SWORDS, Link finds himself broken into four different versions of himself – Green, Red, Blue and Violet Link – and pitted against a fifth, the malevolent Shadow Link who has kidnapped Princess Zelda. The Links must find the Four Sword, the only thing that can combine them so that they are strong enough to stop Shadow Link and save the princess – and the world!

“The latest volume of our LEGENDARY EDITIONS tells the classic FOUR SWORDS story arc,” says Joel Enos, Senior Editor. “Whether it’s the first or fifth volume of the LEGENDARY EDITION that you pick up, all fans will enjoy Link’s enduring and timeless adventures in these deluxe editions filled with bonuses and extras!”

THE LEGEND OF ZELDA manga series was created by Akira Himekawa, which is the pen name of two women known simply as A. Honda and S. Nagano. The pair created The Legend of Zelda manga series which was inspired by several games and story arcs in the Zelda video game series. They have created a variety of manga adventures, which are published by VIZ Media, featuring Link and the popular video game world of THE LEGEND OF ZELDA, including Ocarina of Time, Oracle of Seasons, FOUR SWORDS and more.

Readers also are invited to enjoy VIZ Media’s THE LEGEND OF ZELDA: TWILIGHT PRINCESS, the latest and ongoing manga series based on the beloved Nintendo® video game with story and artwork also created by Akira Himekawa.

For additional information on THE LEGEND OF ZELDA and other manga titles distributed and published by VIZ Media, please visit VIZ.com.