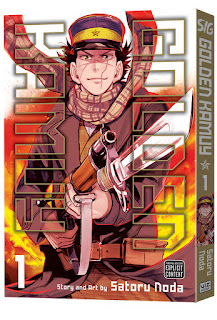 The series debuts in print under the VIZ Signature imprint, is rated ‘M’ for Mature Readers and will carry an MSRP of $12.99 U.S. / $17.99 CAN. Future volumes of GOLDEN KAMUY, which is ongoing in Japan, will be published in English by VIZ Media on a quarterly basis.

In the early twentieth century, Russo-Japanese War veteran Saichi Sugimoto searches the wilderness of the Japanese frontier of Hokkaido for a hoard of hidden gold. With only a cryptic map and a native Ainu girl to help him, Saichi must also deal with every murderous cutthroat, bandit and rogue who knows about the treasure!

GOLDEN KAMUY was the winner of the 2016 Manga Taisho Award and was nominated for the 40th Annual Kodansha Manga Award.

“Manga fans and history buffs will appreciate the historical aspects of GOLDEN KAMUY. Set in Japan’s wild and dangerous northern frontier in the early 20th century, the series also integrates an accurate portrayal of the lives and culture of the Ainu, the indigenous people of the region,” says Michael Montesa, Editor. “Don’t miss the launch of this extraordinary new series this summer!”