Review: "Spotlight" Deserved All the Praise it Received and More 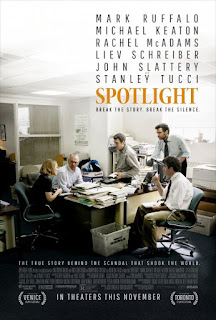 DRAMA with elements of a biopic

Spotlight is a 2015 drama from director and co-writer Tom McCarthy (The Visitor).  Part biographical, Spotlight is based on a true story and is a dramatic retelling of The Boston Globe's efforts to uncover child sex accuse in the Boston area that was perpetrated by Roman Catholic priests.  At the 88th Academy Awards (Sunday, February 28, 2016), Spotlight won the Oscar as the “Best Picture of 2015.”

Spotlight focuses on the editors, reporters, and employees at the venerable newspaper, The Boston Globe, which has a small group of journalists known as the “Spotlight” team.  Spotlight is the oldest continuously operating newspaper investigative unit in the United States.  The Spotlight team works on investigative newspaper articles that take months to research and write before they are published.

In 2001, The Boston Globe hires a new editor, Marty Baron (Liev Schreiber).  Baron meets with Walter “Robby” Robinson (Michael Keaton), the editor of the Spotlight team. Baron had read a Globe column about a lawyer, Mitchell Garabedian (Stanley Tucci), who works with adults who were victims of childhood sexual abuse by Roman Catholic priests and also the parents and their children who are currently being abused.  Garabedian says that the Archbishop of Boston, Cardinal Bernard Law (Len Cariou), knew that the priest, Father John Geoghan, sexually abused children and did nothing to stop the abuse.

Robinson gathers his Spotlight team:  Michael Rezendes (Mike Ruffalo), Sacha Pfeiffer (Rachel McAdams), and Matt Carroll (Brian d'Arcy James) and begins the investigation.  However, they discover a scandal of child molestation and  a cover-up within the local Catholic Archdiocese that is massive, widespread, and older than they could ever imagine.  In order to uncover this conspiracy, the Globe and Spotlight will have to shake the cultural, political, social and spiritual foundations of a city and a church that is determined to keep its darkest secrets hidden.

Spotlight is one of the best films that I have seen over the first 16 years of this 21st century.  I do remember early in my “career” as a “serious” movie watcher reading the writings of people who took American films seriously, and they often talked about “important movies.”  Such films focused on topical or historical matters of importance to America; or were based on true stories that once resonated with Americans or still did to some extent; or they were about racism, bigotry, prejudice, and discrimination based on skin color, sexual orientation, gender, religion, ethnicity, etc.; or they were about terrible events in history, such as wars or genocide (in particularly, the Holocaust).

Then, there seemed (to me at least) to be a backlash against “serious movies.”  Audiences supposedly hated movies with messages or movies in which the filmmakers used the characters as mouthpieces for their believes and agendas.  To me, the result was fewer films like Silkwood, The Killing Fields, and Platoon and more escapist fare like Back to the Future, Armageddon, and Pirates of the Caribbean and like films which have dominated movie theaters for the better part of four decades.

Well, the important movie is back and the result is Spotlight, a film that not only concerns something of great importance, but is also greatly entertaining.  By now, dear reader, you have heard that Spotlight is supremely directed, excellently written, superbly acted, and just an all-around great freakin' film, and that is all true.  I could not stop watching Spotlight.  I think director Tom McCarthy's biggest achievement in this film is to give this story a hypnotic power that holds the viewer in vice-like grip until the credits role and the end of the film.

However, I think Spotlight's true power and achievement are in its indictment of us.  How does great evil “get away with it” in the end?  The fault is not only on the institution which commits and covers up crime, in this case the Roman Catholic Church in general and the Archdiocese of Boston specifically.  The fault is also with basically an entire society, in this case Boston, as the social, political, and economic order down even to the personal level either looks the other way or mitigates the fact that horrible crimes are being committed against that society's most vulnerable members, the children.

It seems that much, if not all, of Boston found a way to avoid punishing, to say nothing of stopping, a group of men (priests and bishops) who basically had the faith, respect, and worship of everyone from raping and sexually abusing children.  The Spotlight is not on why it happened, but is (1) on the people who let it happen, let it keep happening, and let it go unpunished and (2) on the people who decide that it is time to stop the abuse, the abusers, and their apologists and sympathizers.