Nickelodeon Announces Debut of Animated Series, "Bunsen is a Beast" 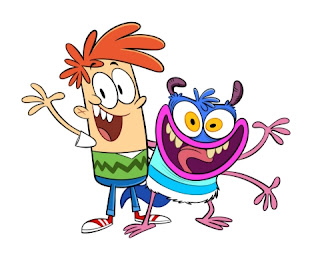 BURBANK, Calif.--(BUSINESS WIRE)--A beast and a human form an unlikely friendship in Nickelodeon’s newest animated series "Bunsen is a Beast," debuting Tuesday, Feb. 21, 2017 at 5:30p.m. (ET/PT). Created and executive produced by Butch Hartman (The Fairly OddParents), the 20-episode series follows the adventures of Bunsen, the first beast to attend a human grade school, and his best friend Mikey. The series will air at 5:30 p.m. (ET/PT) through Friday, Feb. 24, and continue with premieres in its regular timeslot of Saturdays at 10:30 a.m. (ET/PT) on Nickelodeon. Bunsen is a Beast is produced by Nickelodeon in Burbank, which officially opened the doors to its newly expanded building -- an over 200,000 square-foot, state-of-the-art, sustainable complex on January 11.

Bunsen is a Beast tells the story of Bunsen and Mikey, two new friends who embark on endless fun and adventures in their town of Muckledunk. As the first beast ever to attend a middle school for human kids, Bunsen feels the pressure to succeed and prove to the world that monsters can live among humans…and they won’t eat everyone for lunch. With help from Mikey, Bunsen will learn how to accomplish human world tasks, like, doing homework, eating ice cream, and riding the bus. In turn, Mikey will learn to navigate the Beast World and meet all the weird and wonderful beasts that reside there.

In the series premiere, “Bearly Acceptable Behavior,” Amanda tries to get Bunsen kicked out of school when he brings a dangerous bear to class. Next during, “Beast Busters,” Bunsen and Mikey have to save Amanda from mischievous Sneeze Beasts that escape from Bunsen’s nose.

Visit Nick.com, Facebook, Instagram and the Nick App to learn more about Bunsen is a Beast. A sneak peek will air on Monday, Feb. 20, at 7:30 p.m. (ET/PT) on Nickelodeon, and a full-length episode is currently available on Nick.com, Nick On Demand, and the Nick App, available for download on iOS, Apple TV, Roku, Android, and Android TV.

Hartman began his animation career as an assistant animator on An American Tail. He created his own shorts for What a Cartoon!, and also wrote and directed episodes of Dexter’s Laboratory, Cow & Chicken and Johnny Bravo. Bunsen is a Beast marks Hartman’s fourth animated series for Nickelodeon. Hartman joined Nickelodeon in 1998 where he created and produced several cartoon shorts for the Oh Yeah! Cartoons series, including The Fairly OddParents. Commemorating the 10th anniversary of the animated series, Hartman brought the series to life in the 2010 live-action/CG animated hit TV movie, A Fairly OddMovie: Grow Up, Timmy Turner! The series came to life once again in the original TV movie, A Fairly Odd Christmas in 2012 and A Fairly OddSummer in 2014. Hartman is also the creator of Nickelodeon’s animated series Danny Phantom and T.U.F.F. Puppy.


About Nickelodeon
Nickelodeon, now in its 37th year, is the number-one entertainment brand for kids. It has built a diverse, global business by putting kids first in everything it does. The company includes television programming and production in the United States and around the world, plus consumer products, online, recreation, books and feature films. Nickelodeon’s U.S. television network is seen in more than 90 million households and has been the number-one-rated basic cable network for 20 consecutive years. For more information or artwork, visit http://www.nickpress.com. Nickelodeon and all related titles, characters and logos are trademarks of Viacom Inc. (NASDAQ: VIA, VIAB).

Posted by Leroy Douresseaux at 6:33 AM