Review: Tom Hanks is Magnificent in "Bridge of Spies" 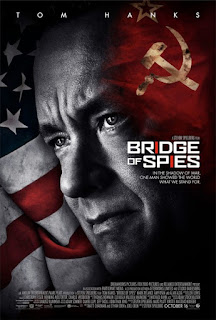 Bridge of Spies is a 2015 historical drama from director Steve Spielberg.  This American-German co-production is based on the true story of lawyer James B. Donovan, who negotiated the exchange of a Soviet KGB spy, who was captured and convicted in the United States, for an American U-2 pilot, who was captured and imprisoned in the Soviet Union.  The film's title apparently refers to the place, Glienicke Bridge, where the exchange of prisoners took place.

Bridge of Spies opens in Brooklyn, New York in 1957.  The FBI is watching suspected Soviet spy, Rudolf Abel (Mark Rylance), who lives alone as a painter of portraits.  Believing that he has recently retrieved a secret message, the FBI agents arrest him.  Because he refuses to cooperate, the FBI tries Abel, but the U.S. government wants Abel to get a “fair trial” as counter-propaganda to any Soviet propaganda and also to show the world that America is true to its ideals.  [Yeah, segregation and Jim Crow:  I get the irony.]

The bar association chooses insurance attorney James B. “Jim” Donovan (Tom Hanks) to defend Abel.  Donovan, who had previously worked on the prosecutions of Nazi war crimes in the Nuremberg trials, takes his work as Abel's attorney seriously.  However, his firm, the prosecuting attorneys, and the judge  want Donovan only to go through the motions.  When he refuses and puts all his efforts into saving Abel's life, his professional and social position, as well as his family, suffer for it.

Some time after these events, military pilot Francis Gary Powers (Austin Stowell) flies a U-2 spy plane over the Soviet Union, where he is shot down and captured.  The USSR proposes a prisoner exchange:  Powers for Abel, and Donovan agrees to handle the negotiations.  After he arrives in communist East Germany where the exchange is to take place, Donovan finds numerous complications and competing interests – on all sides.  If he is to complete his mission, Donovan will have to decide what is the best deal, but his life and freedom will be on the line.

Tom Hanks has been one of the world's best English-speaking actors of the last four decades.  If he painted his house, he could make that look like a major moment in another Oscar-worthy performance.  Hanks is a true movie star, not a faker like those young white male actors who are treated like A-list talent only because they have appeared in a hit action or superhero movie.

Hanks can carry a movie, and so, he carries Bridge of Spies, and not because this is a mediocre movie that needs to be propped up.  Bridge of Spies is a superbly written period piece that deftly balances the social and political arguments and points of contention of the late 1950s and early 1960s with riveting spy drama and international intrigue.

Of course, director Steven Spielberg makes Bridge of Spies a historical drama with bite in two ways.  First, he draws out excellent performances from his cast by allowing veteran actors to do what they do best – fashion the characters on the page of a script into characters on the screen that genuinely feel like real people (as is the case with Mark Rylance as “Rudolf Abel”).  Secondly, Spielberg captures the tensions of the time and recreates the Cold War as a moody film that evokes classic Hollywood Film-Noir with the gravitas of a muscular stage drama.

Still, the script, the directing, and the supporting actors are satellites drawn to the gravity and brilliance of Bridge of Spies' sun, Tom Hanks.  The best of America is exemplified in Hanks' Jim Donovan, and Hanks is up to the task of making this character an exemplar, rather than a caricature spouting corny bromides.  When Donovan tells a CIA agent tailing him what the Constitution of the United States means to a country full of people from a multitude of backgrounds, his words ring out from film and become a beacon – the true shining light on a hill.

Bridge of Spies is an excellent movie, but what makes it exceptional is Tom Hanks giving one of the best performances of his career.  That Hanks did not receive an Oscar, BAFTA, or Golden Globe nomination for this performance speaks to the fact that we have come to take a great American film star for granted.

2016 Golden Globes, USA:  1 nomination: “Best Performance by an Actor in a Supporting Role in a Motion Picture” (Mark Rylance)

The text is copyright © 2017 Leroy Douresseaux. All Rights Reserved. Contact this site for reprint and syndication rights and fees.

Posted by Leroy Douresseaux at 8:25 AM