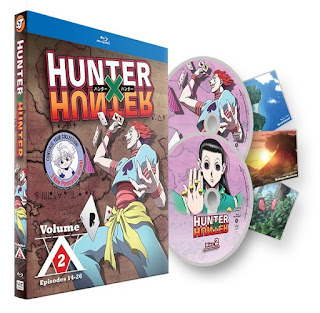 In the Fourth Phase of the Hunter Exam the participants must steal ID badges from each other—and anyone without enough badges at the end of one week fails! It will take trickery, unexpected alliances, and careful negotiations for Gon and his friends to succeed. In the Final Phase, the remaining Hunter candidates are matched up for one-on-one battles—but the only way to win this fight is to lose! After the exam, Gon discovers that Killua has gone back home, so he and his friends head to the Republic of Padokea to find him.

In the original HUNTER X HUNTER manga series, which is also published by VIZ Media (rated ‘T+’ for Older Teens), Hunters are a special breed, dedicated to tracking down treasures, magical beasts, and even other people. But such pursuits require a license, and less than one in a hundred thousand can pass the grueling qualification exam. Those who do pass gain access to restricted areas, amazing stores of information, and the right to call themselves Hunters.

For more information on HUNTER X HUNTER or other anime and manga titles available from VIZ Media, please visit VIZ.com.