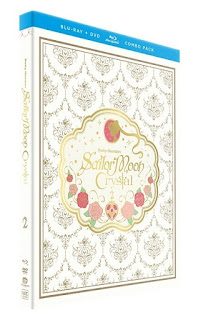 Pre-orders are available now from a variety of leading outlets and online retailers. Fans that order SAILOR MOON CRYSTAL Set 2 from RightStufAnime.com will receive a special SAILOR MOON Suncatcher premium – while supplies last.

Creator Naoko Takeuchi’s groundbreaking saga continues with the Black Moon arc, when a pink-haired young girl falls from the sky and threatens to take the Legendary Silver Crystal from Usagi! But she’s not the only new arrival with an interest in the Crystal, as the mysterious Spectre Sisters are using more than threats to get what they want. When everyone in Sailor Moon’s life is in danger from an enemy she can’t seem to defeat, who can she turn to for help? That young girl and her small key may hold the answer, but can Usagi triumph where so many others have failed?