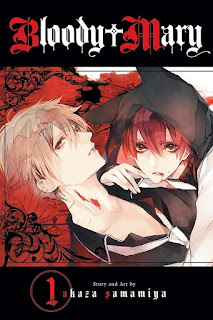 Supernatural Drama Debuts In Print And Digitally, And Offers A Blood Pounding Tale Of An Unorthodox Alliance Between A Vampire And An Exorcist

The new series by creator Akaza Samamiya is rated ‘T’ for Teen and will be published under the Shojo Beat imprint with an MSRP of $9.99 U.S. / $12.99 CAN. BLOODY MARY also launches digitally on December 1st via VIZManga.com and the VIZ Manga App, as well as from the Nook, Kobo, Kindle, iBooks, comiXology, and GooglePlay stores. Future editions of the series will be released quarterly.

“Bloody” Mary is not your typical vampire. He can withstand sunlight, holds a reflection in mirrors, refuses to drink blood–and wants 17-year-old student and priest Maria to kill him. But to Mary’s dismay, Maria doesn’t know how to kill vampires. Desperate to die, Mary agrees to become Maria’s bodyguard until Maria can find a way to kill him at last.

BLOODY MARY creator Akaza Samamiya’s other manga works include Hatsukoi Canvas (First Love Canvas), Torikago Syndrome (Birdcage Syndrome) and Ouji wa Tadaima Dekasegichuu (The Prince Is Gone on Business), all of which have been published in the popular Japanese shojo magazine, Asuka.

Posted by Leroy Douresseaux at 5:07 AM