Review: "The House I Live In" Remains a Timely Documentary 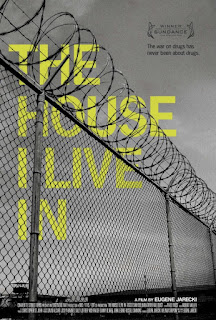 The House I Live In is a 2012 documentary from director Eugene Jarecki.  The film chronicles the War on Drugs in the United States.  Danny Glover, John Legend, Brad Pitt, and Russell Simmons are among the film's executive producers.

Eugene Jarecki's examination of the War on Drugs spring from a deeply personal place.  He takes notice of how drugs have affected Nannie Jeter and her family.  Ms. Jeter was the housekeeper in the Jarecki home, and she was the caretaker of the Jarecki children, especially of Eugene.

From there, The House I Live In shines a harsh light on “War on Drugs” in the United States and both its immediate and long-term impact on American society, especially at the bottom rungs of society where the working class, poor, and destitute reside.  Jarecki's film tells the stories of dealers, of police officers and other law-enforcement officials, of prison inmates, and of other people affected by this decades-old crusade against the sale and use of illegal narcotics.  Through these stories, the film reveals the profound human rights implications of America's “War on Drugs.”

The House I Live In tackles subject matter that is both complicated and that is long ongoing.  When President Richard Nixon began what we know as the “War on Drugs” in 1971, people probably thought of it as simply “the war of drugs,” no capital letters.  At some point, however, the war of drugs became the “War on Drugs,” with capital letters.  This “war” was all-encompassing, becoming the biggest fight against crime in the U.S.  According to Jarecki, the country has spent over one trillion dollars on the War on Drugs, with something like 45 million people have been convicted of drug-related crimes.

More than anything, families and communities have been affected, and by affected, I mean damaged, ruined, and even destroyed.  That is where The House I Live In turns darker and becomes a little more complicated and controversial.  I don't want to spoil the film for those who have not seen it (and please, do see it), but this documentary flat out states that the beginnings of the “War on Drugs” goes back farther than many people realize and that the early battlefronts usually involved various minority and outsider groups.  What people did not realize in the past was that eventually this war would ensnare those who never thought their little tribes would be the focus of a state-sanctioned, destructive crusade.

As with many such documentaries, Jarecki includes interviews with numerous people who study or are involved directly or indirectly in the War on Drugs.  I suggest that viewers pay special attention to Michelle Alexander, a civil rights litigator and the author of the non-fiction book, The New Jim Crow.  She is one of most important voices in matters of civil rights and of American history concerning the lives and the oppression of slaves and their African-American descendants.

Once again, Eugene Jarecki has delved into the dark side of official America, the powers-that-be, as he did in his documentary film, Why We Fight.  The House I Live In is one of those documentaries that should be considered an educational film, a must-see for all middle and high school students across the country.  It wouldn't hurt for the general public to see this film; in fact, it might help the country.  The House I Live In is an engrossing, engaging documentary film that refuses to let you turn away, and most importantly, it is truly an “important film.”