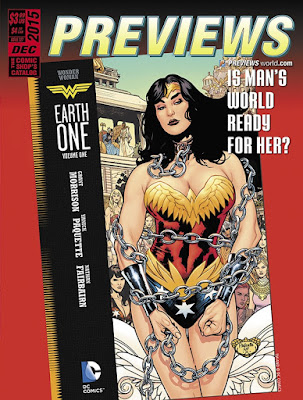 ON OUR BACK COVER: Civilization has collapsed in the face of an ice age in Joe Harris and Martin Morazzo's new series Snowfall from Image Comics.

Unsung Heroes —It's not easy being a superhero these days. There's plenty of competition, and you've got to stand out in the crowd if you're going to make your mark. To that end, PREVIEWS celebrates indie superheroes with our "Unsung Heroes" event this month, bringing these deserving characters and series into the spotlight.

On the Flipside —:01 First Second celebrates its tenth anniversary this year, and PREVIEWS talks with First Second's Editorial Director Mark Siegel and Associate Marketing and Publicity Manager Gina Gagliano about the company, where they've been, and where they're going.

Gems of the Month — December's PREVIEWS Gems of the Month include: Lara Croft is back in action in Dark Horse Comics' new Tomb Raider series, set after the new video game; Superman faces a multiversal threat in Neal Adams' new DC Entertainment mini-series, Superman: The Coming of the Supermen; a secret fighting tournament leads to an unexpected crossover in IDW Publishing's Street Fighter x G.I. Joe; Emma Rios and Hwei Lim enter the world of 8House in Image Comics's new series Mirror; and two of Marvel Comics's best-known street level heroes are back in Power Man and Iron Fist.

Splash — PREVIEWS shines a special spotlight at some of the blockbuster books and products coming out in February, including the debut of Miles Morales in the All-New All-Different Marvel universe in Marvel Comics' Spider-Man from Brian Michael Bendis and Sara Pichelli; a new era dawns on Barsoom in Dynamite Entertainment's Dejah Thoris; a Time Lord will offer you a jelly baby in Titan Comics' Doctor Who: The Fourth Doctor; Looney Labs unleashes Firefly Fluxx; and many more products you have to look forward to in the new year.

PREVIEWS Exclusive Apparel — Each month PREVIEWS offers comic book fans and pop culture aficionados a selection of t-shirts and other apparel that can only be found in your local comic shop! Underboss brings fans the DC Bombshells Panty & Camisole Sets featuring Ant Lucia's pin-up style artwork of Harley Quinn or Wonder Woman. The Red Hood's symbol is featured on the DC Comics: Red Hood "Flip" Black T-Shirt, and Howard the Duck stars on the Howard the Duck: "Space Duck" Black T-Shirt. These and many other shirts can only be found through PREVIEWS.

Plus: Staff Picks, the month's Certified Cool books, the monthly Bestseller Charts, and so much more!

All this awaits you in the December edition of PREVIEWS, which goes on sale at your local comic shop or specialty store on Wednesday, November 25th with the new, lower cover price of just $3.99.


ABOUT DIAMOND COMIC DISTRIBUTORS (DCD) — Diamond is at the nexus of comics and pop culture merchandise. Based in Baltimore, MD, DCD is the world's largest distributor of English-language comic books and pop-culture related merchandise, servicing more than 4,000 specialty retailers worldwide. For more information, visit Diamond on the web at www.diamondcomics.com. 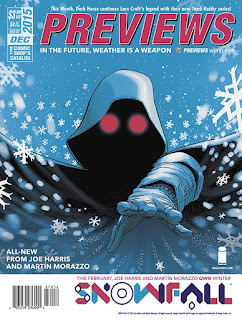