Review: "Vampyr" is Imaginative and Striking 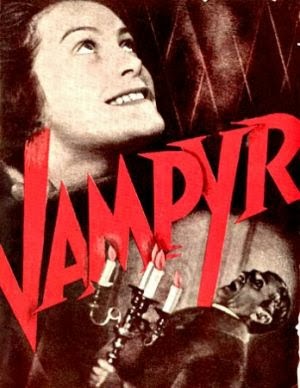 The subject of this movie review is Vampyr or Vampyr – Der Traum des Allan Grey (Vampire: The Dream of Allan Grey), a 1932 French-German horror film from Danish director, Carl Theodor Dreyer.  The film is based on elements taken from the short story collection, In a Glass Darkly, by author J. Sheridan Le Fanu.  The film is noted for being financed by the star of the film, Nicolas de Gunzburg, who acted under the name, “Julian West.”  Vampyr follows a traveler, who is obsessed with the supernatural, as he visits a village that is under the curse of a vampire.

Allan Gray (Julian West), a holiday reveler, stops in the eerie European village of Courtempierre, where he takes a room at a small inn.  Later that night, an elderly gentleman awakens Allan when he enters Allan’s room and leaves a parcel.  He writes on the package, “To be opened in the event of my death.”  Gray later witnesses the man’s murder, so he opens the package and discovers several pages of writings on the “vampyr.”  Gray later learns that a strange supernatural killer is on the loose, and that the culprit may be someone highly respected in the village.

Carl Theodor Dreyer’s Vampyr –Der Traum des Allan Grey (or simply, Vampyr) is still considered by some film aficionados to be one of the great cinematic horror movies.  The film’s one big flaw is that it was shot cheaply using an experimental sound process, so the quality of the soundtrack leaves so much to be desired.  Still, the dreamy-like photography combined with the surreal, illusory and trancelike imagery more than make up for sound deficiencies.

Vampyr contains some truly creepy and skin-crawling visuals, including an extended sequence in which the hero witnesses his body in a coffin being carried past the massive old village church and into the graveyard.  Julian West’s performance, which sees him spend much time either listless or in a somnambulant state, adds to this film’s otherworldly quality.  Vampyr is a must see for movie buffs who love horror flicks, especially vampire films.


Posted by Leroy Douresseaux at 9:44 AM