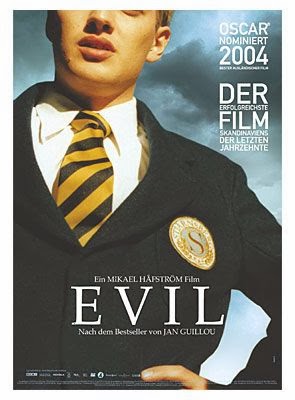 The subject of this movie review Ondskan (Evil), a 2003 private school drama from director, Mikael Hafstrom.  The film is based on the 1981 Swedish autobiographical novel, Ondskan (The Evil) by Jan Guillon.  The film received a limited theatrical release in the United States in 2006.

After numerous fights in which he brutalized his victims, a rebellious teenager, Erik Ponti (Andreas Wilson), is expelled from high school after the headmaster declares him “Evil,” while also noting what a good student Erik is.  Erik also has a pitiful home life, in which his bullying Stepfather (Johan Rabaeus) beats him while his Mother (Marie Richardson) suffers in silence.  Erik’s mother sells off some of her family heirlooms to send Erik to the prestigious boarding school, Stjärnsberg.  This is Erik’s last chance to finish high school, which will allow him to move to the next class (called “forms”), the “Sixth Form.”  However, if Stjärnsberg expels him, his chance at law school is finished.

Erik is determined to live in peace at his new school, but after having endured so many beatings from his stepfather, Erik is shocked to learn Stjärnsberg has a similar attitude of abuse.  He faces a constant barrage of verbal and physical threats from the school’s senior class, in particularly a group of students (whose families are nobility) – led by a pompous bully named Otto Silverhielm (Gustaf Skarsgård).  They torment the younger students mercilessly, but Erik refuses to accept a low place on the totem pole and just wants to be left alone.  Although he takes some of their punishment, they want to crack him, but he won’t crack or lash out in violence.  When Otto turns his anger towards Erik’s best friend and roommate, Pierre Tanguy (Henrik Lundström), Erik must face the evil within him and the evil of Otto and his gang of bullies.  Erik also has a romantic entanglement with Marja (Linda Zilliacus), a member of the school’s kitchen staff, which, if discovered, will get him expelled and her fired.

Mikael Håfström’s film Ondskan – English title Evil – received a 2004 Academy Award nomination for “Best Foreign Language Film” as a representative of Sweden.  Although the film may remind some U.S. viewers of Dead Poets’ Society because both share an elite boarding school the setting, Ondskan is probably closer to the 1992 prep school drama, School Ties.  Based on Jan Guillon’s novel (which in turn was based upon some of his experiences as a boarding school student), Ondskan is a rumination on both the evil in people (as manifested by their actions) and the evil they accept (the actions of others that they tolerate out of habit or because of social conventions).  Mikael Håfström manages to delve into the script’s, which he co-wrote, more thoughtful pursuits, while extracting the tense drama the setting – a boarding school full of conflicting ideologies, social classes, cliques, motivations, etc. – allows him.

He has a star in Andreas Wilson, the kind of young actor with the fierce charisma needed to play a screen tough like Erik.  Wilson’s ability to portray quite determination and also hate, rage, and evil boiling under the surface with such subtlety both drives and carries this film.  Hollywood taking notice of him would be a good thing.

Posted by Leroy Douresseaux at 7:57 AM