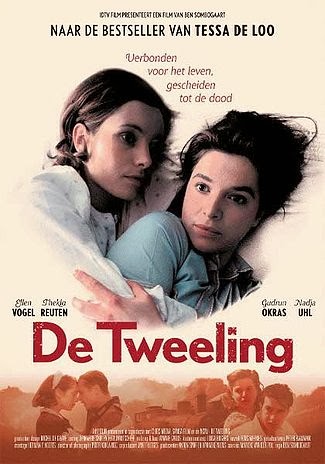 The subject of this movie review is De Tweeling (Twin Sisters), a 2002 Dutch drama, romance, and war movie from director Ben Sombogaart.  The film is based on the 1993 novel, De Tweeling, by Tessa de Loo.  The film received a theatrical release in the United States in May 2005.

De Tweeling or Twin Sisters earned a 2004 Academy Award nomination for “Best Foreign Language Film” (Netherlands).  The film opens in 1925 and introduces us to German twin sisters, Anna (Sina Richardt) and Lotte (Julia Koopmans), who live with their well to do, widower father.  When he dies of consumption in 1926, competing relatives with different agendas separate the girls.  Anna remains in Germany on her uncle’s farm where he basically uses her as cheap labor.  A rich aunt and uncle take Lotte to Holland, where she lives a privileged life of culture, education, and opportunity.

The bulk of the story takes place between 1936 and 1947, when the sisters, now young women find themselves on opposite sides of World War II.  The young adult Anna (Nadja Uhl) marries a young Austrian soldier, Martin (Roman Knizka), who goes on to become an SS officer.  The young adult Lotte (Thekla Reuten) falls in love with a Jewish musician, David (Jeroen Spitzenberger), who ends up in a concentration camp.  The film later finds the sisters estranged from one another as old ladies, with Old Anne (Gudrun Okras) trying to reconcile her differences with Old Lotte (Ellen Vogel).

Twin Sisters is a compelling drama that is at its heart a bittersweet romance about two sisters who dearly love each other, but find that not only are their home countries at odds, but also their choice in lovers.  Indeed, the sisters’ lives during WWII are the center of this tale with the sequences involving Anne and Lotte as old women being nothing more than TV movie-of-the-week melodrama.  The opening segment with the sisters as six-year olds is sentimental and darkly sweet, while being something like a surreal and tragic fairy tale of kidnapped princes.

The film seems to jump around too much, but director Ben Sombogaart and writer Marieke van der Pol do their best work chronicling the sisters’ painfully desperate attempt to hold onto their lovers.  That’s the film right there, and although this adapts a novel, the movie should have focused exclusively, except for maybe a framing sequence, on the sisters as young women.  Here is the best acting both on the part of the actresses playing the sisters and the supporting cast portraying their family, friends, and acquaintances.  The horror the Holocaust creeps around the edges of the film here giving it a solid dramatic impact.  The tenuous relationship of the sisters at this point makes compelling drama – almost compelling enough to make you forget there aren’t enough of the best parts of Twin Sisters.


Posted by Leroy Douresseaux at 8:10 AM