Review: "Barton Fink" is Something ... Else (Happy B'day, John Turturro) 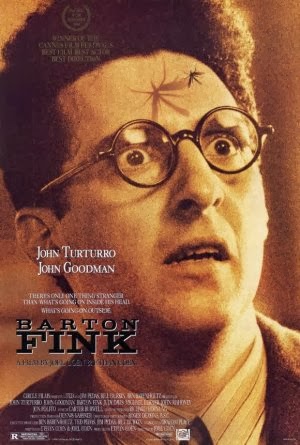 The subject of this movie review is Barton Fink, a 1991 period drama co-written and directed by Joel Coen and co-written and produced by Ethan Coen, although both brothers likely shared in producing and directing the film.  Barton Fink focuses on a renowned New York playwright who is enticed to Hollywood to write film scripts for a film studio only to discover hellish truths about his new job and home.

In 1991, The Coen Brothers, co-writer/director Joel and co-writer/producer Ethan, took the Cannes Film Festival by storm with their film Barton Fink, winning the Golden Palm as Best Picture and the award for Best Direction (an award that Joel has since won twice more).  John Turturro also won the Best Actor award for his role as the title character.  As much as I like the Coens' work, this is by far my least favorite film of theirs.

In 1941, intellectual New York playwright Barton Fink (John Turturro) moves to California to write a B-movie script for a major studio.  His new boss, Jack Lipnick (Michael Lerner) wants that Barton Fink touch for a new Wallace Beery wrestling movie.  Fink takes up residence in the Hotel Earle, a rundown establishment with a sheen of faux-grandeur.  He eventually meets his neighbor, the blustery, strange, and mysterious Charlie Meadows (John Goodman), who claims to be a traveling insurance salesman.  Although he meets many interesting characters, Fink is busy fighting writer’s block, and his new home becomes a hell for him as his deadline to deliver a script looms.

The first warning to a viewer before he sees Barton Fink is that the film is surrealistic, a situation in which the story contains lots of symbolism.  This is not standard, linear filmmaking, so the viewer has to closely watch the film for visual hints and listen to the soundtrack for audio clues to understand the story in lieu of having literal, obvious story details.  Don’t read this sentence as it may spoil the surprise of unraveling this film’s mysteries:  Hotel Earle is hell, the hell in which Barton suffers writer’s block, and Charlie Meadows is not only a killer, but he may well be “the devil.”  If you try to take this film literally, you will find it atrocious and boring.  Creative people, especially writers, will certainly understand, through Barton, the intense frustration that writer’s block can cause a scribe.

Still, for all its pretensions to art and its portrayal of the intellectual’s strong need to produce “something good,” Barton Fink is a misstep.  I will give a hearty nod to the Coens' ambitious intentions.  The acting is very good.  It’s less technical and more show.  It’s flamboyant and colorful and immediately describes the characters to the audience, none of this serious method stuff, just old-fashioned, grand pretending that fills the screen.  I really liked the film’s element of suspense and mystery.  The hotel is automatically creepy, but it’s nothing compared to the unusual landscape of the relationship between the characters.  One thing that certainly kept my interest was trying to figure out what these people had going on amongst themselves.  I could understand when two people were connected, but the joy was figuring out why they had a relationship.

Overall, the film is slow and occasionally plodding, especially in between moments of drama and intrigue, but the brothers have a way of waking you up just when you think that their film is loosing steam.  I recommend this to fans of the Coens’ films and to people who like that different kind of film that is called “art,” the ones that are about something other than just entertaining you.

No sirree, Bob.  The Coens might entertain you, but never at the cost of giving you cheap candy, not when they can use their talents to make a complicated confection, even if the end result doesn’t quite taste right.

1992 Golden Globes, USA:  1 nomination: “Best Performance by an Actor in a Supporting Role in a Motion Picture” (John Goodman)