Review: "Toy Story 3" is Really Good; So What Else is New? 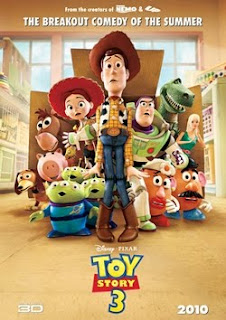 It was an 11-year wait for a sequel to Toy Story 2. The beloved, computer-animated Toy Story film franchise closes with Toy Story 3. The creation of Pixar Animation Studios (Monsters, Inc., Up), Toy Story 3 opened to near universal acclaim and record-setting box office, so I don’t know what more I can say. I was spellbound by the previous films. If I’d had a vote, I would have voted the first two Toy Story movies the best picture Oscar winners for 1995 and 1999, respectively.

Toy Story 3 begins with 17-year-old Andy Davis (John Morris) packing as he prepares to head off to college. Andy has not played with his toys in years, but he decides to take Woody (Tom Hanks) to college with him and store the other toys in the attic. Of course, Buzz Lightyear (Tim Allen), Jessie (Joan Cusack), and the rest of the toys are disappointed. However, when Andy’s mom, Mrs. Davis (Laurie Metcalf), mistakenly throws them out, they’re furious. They climb into a box of stuff to be donated to Sunnyside Daycare. They also refuse to listen to Woody when he tries to explain that Mrs. Davis’ action was a mistake.

Andy’s toys are enthusiastically welcomed by the numerous toys at Sunnyside. The leader of the Sunnyside toys, Lots O’-Huggin Bear a.k.a. “Lotso” (Ned Beatty), gives the newcomers a tour. Andy’s toys quickly become enamored with their new home, and Woody is forced to leave without them in his attempt to return home to Andy. However, all is not sunny at Sunnyside, and so, a thrilling rescue mission and breathless adventure ensue before they return home, again.

Lots O’-animated movies blend adventure, comedy, and emotion, some more deftly than others, but the difference is that in every Pixar film, the emotions are always honest and genuine. Even with expectations so high for Toy Story 3, Pixar still managed to produce a movie that charmed, captivated, and moved audiences so deeply, even making grown men cry at the end.

Starting with the first film, I was not surprised that a 3D digitally animated film about plastic toys could charm us. I’ve been watching the work of animators and filmmakers of animated movies entertain, impress, and dazzle for decades. The more talented the animators, the more they are able to match the power of live-action film, and sometimes even surpass the work of the best live-action filmmakers. Toy Story 3 is clever and exhilarating, poignant and stirring, and amusing and sometimes just plain funny.

Still, I can say the above about a lot of Pixar productions, but this time there is something a bit darker and perhaps, more special about this movie. The story echoes themes of death and endings, betrayal and bitterness, and change and new beginnings – with children’s playthings as the characters. It is like classic juvenile literature that speaks to all of us. That’s it. Toy Story 3 is great.