Planet of the Apes: Razzie Winner for Worst Remake - It's Not So Bad 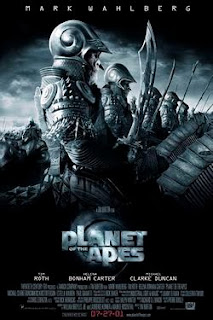 SCI-FI/FANTASY/ACTION/THRILLER with elements of adventure

When Captain Leo Davidson (Mark Wahlberg) leaves the safety of a United States Air Force space station, he is on an unauthorized mission to save his favorite chimp. He enters some kind of electro-magnetic storm, and his space pod crashes on an uncharted planet.

Before long, he is running through the jungle with a back of wild humans, chased by half glimpsed pursuers. A group of talking apes led by General Thade (Tim Roth) capture Davidson and the humans. Ari (Helena Bonham-Carter) buys Davidson because his intelligence and demeanor piques her interest. He convinces her to follow him on a quest to find his shipmates whom he believes are on the planet in search of him. However, a deeper mystery resides in the desert heart of their destination.

Directed by one of cinema’s finest visual stylists, Tim Burton, Planet of the Apes, the 2001 remake of the 1968 classic is noisy spectacle that is not without some nice moments. Burton has admitted to not knowing a good script when he sees one, but when he inadvertently gets one, he makes good movies (Beetlejuice, Edward Scissorhands, Ed Wood, and Sleepy Hollow). When he gets a troubled piece of writing, the audience writhes in pain at the cinematic potential clumsily handled before their eyes (Batman Returns); this one falls somewhere in the middle.

The script is a simple cat and mouse chase story with a battle scene thrown late into the movie for a faux epic aura. Here and there are smatterings of issues of freedom, slavery, intelligence, friendship and betrayal, but the smart stuff doesn’t get in the way of the fun, dumb stuff – fist fights, gunfire and explosions. Burton expertly wields the story and creates a nearly two-hour movie that feels much shorter. It is a “lite” affair meant to entertain by keeping the protagonists in a constant state of discomfort and definite sense of entertainment.

The acting is mostly adequate professional work. Ms. Bonham-Carter creates the illusion that her character Ari has quite a bit of depth, more so than with which the action movie script can deal; there’s not too much time for character in many action movies. Michael Clarke Duncan as Thade’s right hand man-ape, Colonel Attar, is wonderfully convincing as an officer and as a leader of soldiers. Cary-Hiroyuki Tagawa as Krull, the disgraced soldier, is equally compelling; between Attar and Krull is some interesting back-story that would have greatly embellished the movie had that story been give a chance. But this is a summer bang-bang.

Planet of the Apes wastes the talented Roth, who can portray layered, multi-dimensional villains (such as the vile Archibald Cunningham in Rob Roy, which earned him an Oscar nomination) behind a heavy costume. Here, the mask hides that which truly makes Roth’s gifts work, his face of a thousand expressions – exaggerated and otherwise. This is no criticism of the fantastic work of makeup effects artist Rick Baker. Once again, he uncannily delivers brilliant work. However, the glare from Baker’s skills dim the light of Roth’s thespian talents.

Light fare for sure, Planet of the Apes’ massive box office success is a surprise. But it’s clear and linear movie and it properly strings the audience along until it’s pitiable ending. By then, one gets the feeling that this entire exercise was merely the testing ground for a long lasting franchise similar to the franchise birthed from the original.

Still, the magic is in what Burton does. This is a very entertaining movie and remains so even as one tries to poke holes in it. One can hold the same light up to Beetlejuice, Edward Scissorhands, and Sleepy Hollow and find all manner of ridiculousness, but they remain fun films, always ready to be popped into a VCR or DVD player and become a filling midnight video snack.

Planet of the Apes is like that and it pretty much delivers on being the vacuous treat it started out to be. Not much of a goal, but a goal attained, more or less.

Posted by Leroy Douresseaux at 1:39 PM