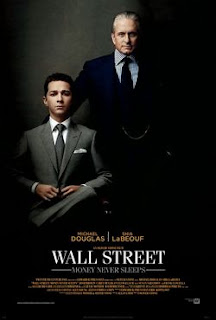 Wall Street: Money Never Sleeps, a film from Oliver Stone, is a sequel to Stone’s 1987 movie, Wall Street. Money Never Sleeps is set 23 years after the original and revolves around the 2008 financial crisis. It focuses on a young trader working to unite a legendary Wall Street figure with his daughter, the trader’s girlfriend. As good as it is, however, the new film does not resonate the way the original did.

The film opens in 2001 with Gordon Gekko (Michael Douglas), the Wall Street titan of the first film, being released from federal prison after serving eight years for insider trading and securities fraud. Jumping seven years later, the film shifts focus to Jacob “Jake” Moore (Shia LaBeouf), a trader at Keller Zabel, a major Wall Street investment bank. Jake is trying to raise 100 million dollars to fund a fusion research project. Keller Zabel, however, is in trouble, and the firm’s managing director, Louis Zabel (Frank Langella), who is also Jake’s mentor, goes down with his firm.

In the aftermath, Jake proposes to his girlfriend, Winnie Gekko (Carey Mulligan), Gordon Gekko’s daughter. Jake also meets Gordon and retries to reunite him with Winnie, who wants nothing to do with her father. Behind Winnie’s back, Jake and Gekko plot revenge against Bretton James (Josh Brolin). The CEO of investment firm Churchill Schwartz, James helped bring down Keller Zabel. Gekko also has a score to settle, but Jake is about to learn how troublesome Gekko is to friend and foe alike.

The original Wall Street was about power, insiders, information, influence, and greed. Wall Street: Money Never Sleeps is about lying, cheating, and a monstrous form of greed that will eat and/or destroy everything around it, regardless of the damage done or even potential harm done to itself. With that kind of subject matter, Money Never Sleeps should be a better film than it is. It is certainly a good film, with excellent performances, but it never reaches its potential.

Neither the film’s writers nor Stone, its director, seem able to distinguish what Money Never Sleeps’ focus is supposed to be. Is it about Jake and Gekko or Jake versus Bretton James or Jake and Gekko versus Bretton? Is it about Jake trying to reunite Gekko with his estranged daughter, Winnie? The film tries all these plots and storylines, but mostly leaves them with unsatisfying and/or half-done resolutions.

Where as the first film had the central conflict of Douglas’ Gordon Gekko versus Charlie Sheen’s Bud Fox (who makes a cameo in the new film), Money Never Sleeps lacks a strong central conflict. The first film dealt with insider trading, giving the audience clear details into how this illegal practice works. Because the bugaboo of the new film is the confusing matter of derivatives, the screenplay avoids the details, and the movie suffers for it.

The performances are all good. Shia LaBeouf is surprising and holds his own against Michael Douglas, affirming that the young actor can be a leading man. Douglas gets better with age, and he has been good for longer than LaBeouf has been alive. It is easy to forget how capable Douglas is of being subtle, as he gives Gekko more layers than the viewer can count.

Watching Douglas, it becomes obvious that even if the new movie is about the new players on Wall Street, the movie loves the smartest, most dangerous, and most enigmatic player, Gordon Gekko. One of the reasons that Wall Street: Money Never Sleeps is good is because it has the strongest element from the first film, Gekko. Despite its strengths, the new film cannot come up with anything of its own that is as memorable as Gordon Gekko.

NOTES:
2011 Golden Globes: 1 nomination: “Best Performance by an Actor in a Supporting Role in a Motion Picture” (Michael Douglas)