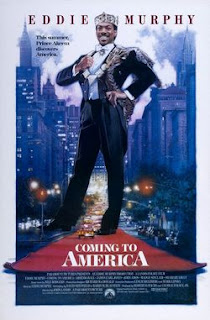 A pampered heir to an African throne, Prince Akeem (Eddie Murphy), wants more out of life, and he wants a woman with her own mind, someone other than the beautiful woman to whom he’s engaged, Imani Izzi (Vanessa Bell). His father, King Jaffe Joffer (James Earl Jones), the ruler of Zamunda, encourages Akeem to go to America and sow his royal oats. However, Akeem heads to New York City, specifically Queens, to find a mate who will fall in love with him for who he is not what he is. Accompanied by his trusty sidekick, Semmi (Arsenio Hall), Akeem takes a low-paying job at a McDonald’s-like fast food restaurant, McDowell’s. He keeps his true identity secret and eventually begins a romance with Lisa McDowell (Shari Headley), the daughter of the boss, Cleo McDowell (John Amos). But will his royal lineage ruin Akeem’s chances with Lisa?

Coming to America remains one of my favorite Eddie Murphy films. It’s both funny, and the film also reveals the romantic side of Eddie Murphy’s talents as an actor – something we’d see more of in later films. The script by David Sheffield and Barry W. Blaustein, two writers who wrote many of Murphy’s sketches while he was a cast member of “Saturday Night Live” in the mid-80’s, crafted a light-hearted, but engaging romantic comedy, and sprinkle it with numerous comic sketches and scenes. The writers provide comic gems not only for Murphy and Arsenio Hall, but also for the rest of the cast, which gives even actors with the smallest parts something into which they can sink their teeth. James Earl Jones, John Amos, and Madge Sinclair as Queen Aoleon shine in supporting roles.

Many people remember the film for the fact that Murphy and Hall played more than one role, thanks in large part to the amazing makeup by Oscar-winning makeup effects whiz, Rick Baker (who earned an Oscar nomination for this film, but lost that year to the makeup team on Beetlejuice). Hall plays three characters in addition to Semmi, including one female character. Murphy plays three characters in addition to Prince Akeem, including a Caucasian male. The makeup and their performances were so convincing that some of the audience didn’t realize that Murphy and Hall were playing multiple parts, in particularly Murphy as the old white man, Saul.

Coming to America also had good production values, including an amazing array of colorful (though sometimes outlandish costumes) costumes and a multiplicity of sets reflecting everything from regal splendor to lower class squalor. Probably the best thing that the set decorator and art director did was create an African kingdom that reflects African-American fantasy and myth-making about African monarchies, but something with the whimsy of, say, the Emerald City in The Wizard of Oz. If that weren’t enough, the cast features many very talented black actors who rarely get work simple because they’re black, but this film gives us a chance to see these talented performers. That’s why Coming to America remains one of the great African-American romantic comedies, and it is also one of the first times in film that we see Eddie Murphy show the scope of his ability to play a variety of characters.

Posted by Leroy Douresseaux at 11:59 AM