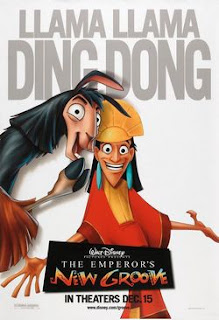 In a once-upon-a-time, Disney storybook version of the Incan Empire, Emperor Kuzco (voice of David Spade) is a selfish and childish monarch who rules over his kingdom as if it were his personal play land. However, Yzma (Eartha Kitt), the vengeful priestess who was his advisor before he fired her, turns Kuzco into a llama, but Yzma’s co-conspirator, Kronk (Patrick Warburton), fails to properly dispose of llama Kuzco. Pacha (John Goodman), a gentle llama herder, inadvertently rescues Kuzco, who had actually planned on razing Pacha’s hillside home to build a summer palace. Pacha, while trying to teach him the value of friendship and selflessness, goes on a jungle adventure to help Kuzco regain both his humanity and his throne.

The Emperor’s New Groove certainly isn’t a Disney animated classic on the level of Bambi or Beauty and the Beast (but then what is), but it is something the company can do very well – produce delightful and funny family entertainment. Its wacky brand of comedy and self-knowingly sarcasm brings to life what is initially a painfully slow and clunky film. In spite of a shake start the film becomes a slapstick comedy about two buddies racing to reach a goal before their clownish, but relentless pursuers stop them. This is the kind of a funny animal fable Disney does well, one that emphasizes lots of life lessons for the young ‘uns (and many adults certainly could do to learn those lessons well).  In a way, this is also like a feature-length version of a Warner Bros. Looney Tune cartoon.

The film features wonderful background illustrations of a fanciful version of the Andes and the Incan Empire. Lush jungle backdrops, imaginative sets and art direction, colorful costumes, and appealing character designs are a winning combination. Two things, however, really sell this film. First, the character animation and film direction maintain and lively pace and engages the viewers with an ever changing situation. This is truly a jungle adventure as the scenery changes creating sort of an edge-of-your-seat comedy caper.

Secondly, the voice acting is quite good. David Spade can be a little grating, but it’s hard to imagine anyone else playing the self-absorbed Kuzco. John Goodman is fine as usual playing the wise and gentle older fellow with his deep and rich-sounding voice. Patrick Warburton’s rumbling tones are always welcome. The big surprise here is Earth Kitt’s voice performance as Yzma, as she deftly mixes comic menace and casual asides that make Yzma a grand villainness in the great Disney tradition of wicked witches and wily women of magic.

NOTES:
2001 Academy Awards: 1 nomination: “Best Music, Original Song” (Sting-composer/lyricist and David Hartley-composer for the song "My Funny Friend and Me")

2001 Golden Globes: 1 nomination: “Best Original Song - Motion Picture” (Sting and David Hartley for the song "My Funny Friend and Me")

Posted by Leroy Douresseaux at 6:58 AM