"All About the Benjamins" Right On the Money 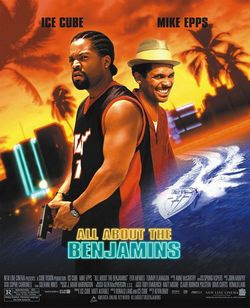 Bucum (Ice Cube) is a Miami-based bail enforcement agent (bounty hunter). Reginald “Reggie” Wright (Michael Epps) is a conman and frequent quarry of Bucum’s. Reggie’s failed to show up for a court date, so Bucum is out for him again. Bucum spots Reggie exiting a small market where he’s just picked up a lottery ticket for his girl, Gina (Eva Mendes). During the chase, Reggie ducks into a van to hide. What he doesn’t know is that the vehicle belongs to the brother/sister criminal team of Julian Ramose (Roger Guenveur Smith) and Ursula (Carmen Chaplin). The siblings are involved in a double-cross/heist of $20 million in diamonds for their boss, Williamson (Tommy Flanagan). They discover Reggie in their van, and though he eludes them, he leaves behind his wallet, which, of course, contains the lottery ticket.

When Reggie and Gina discover that the ticket Reggie lost is the winner of a $60 million jackpot, they convince a reluctant Bucum to help them find Reggie’s wallet and the ticket before he brings Reggie to jail for missing that court date. One thing complicates it: Bucum also wants to find the $20 million in uncut diamonds and bring down Williamson for two reason: for his own reputation and to trump the cops.

All About the Benjamins is simply a very good buddy action movie. It doesn’t have the self-referential coolness of The Last Boy Scout, nor is it the trendsetter that 48 Hours and Lethal Weapon were, but it’s an engaging B-movie crime flick complete with violent hoods, sly conmen, and a rebellious bounty hunter out to get paid even if he has to take his cut off the side

Ice Cube isn’t a great actor (or a very good one for that matter), but he always gets an “A” for effort. He plays that belligerent Bucum as not quite an unstoppable badass, but as more as guy whose smartness “the Man” underestimates. Mike Epps does a neat turn as the conman Reggie who never seems to run out of one-liners, though this is not a good acting effort on his part. He overacts, badly at times, but his comic sensibilities somewhat save the performance. This was Eva Mendes’ first shot as an action movie chick, but even here she shows the excellent comic timing, acting ability, and star quality that earned her some nice supporting roles next to big stars (Denzel Washington in Out of Time and Will Smith in Hitch). Also look for the usually small, but nice appearance by Roger Geunveur Smith.