"I Now Pronounce You Chuck and Larry" Dumb and Eloquent 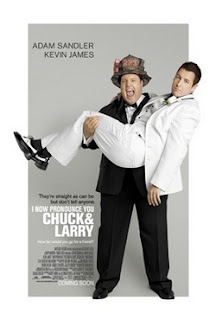 In I Now Pronounce You Chuck and Larry, two guys’ guys pose as gay lovers in order for one of the men to make sure his children get his insurance benefits.

New York City firemen Chuck Levine (Adam Sandler) and Larry Valentine (Kevin James) are the pride of their fire station. Loyal to the core, they’ll do anything for each other, but after Larry saves Chuck’s life, Chuck is about to find out just how much owing his buddy will cost him. When widower Larry realizes that civil service red tape might keep his children, Eric (Cole Morgan) and Tori (Shelby Adamowsky), from getting his life insurance benefits, he knows that one of the ways to insure his children’s financial future is to get married.

Still deeply mourning his late wife, Larry hasn’t dated since her death or really moved on from that tragedy. A newspaper article gives him a crazy idea – domestic partnership benefits for same-sex couples, so he asks Chuck to pose as his live-in gay lover. Chuck, however, has a vigorous sex life as a heterosexual and often entertains several women at a time, and wants no part of Larry’s plan. But he owes Larry. After the friends start posing as love-struck newlyweds, nosey city bureaucrat, Clinton Fitzer (Steve Buscemi), starts to investigate the alleged relationship, so the buddies are forced to present a genuine picture of domestic bliss. After the boys hire a lawyer that specializes in their situation, Chuck falls hard for their sexy attorney, Alex McDonough (Jessica Biel), and his lust just might reveal his and Larry’s secret.

I Now Pronounce You Chuck and Larry is a somewhat badly made, broad comedy, but it sure is funny. The writers seem to have written a flimsy script that simply plays up to the numerous possibilities for comic misunderstanding this concept offers. It’s not lacking in cleverness so much as it is overly abundant in crassness and gross-out humor. That crudeness is actually personified more in Ving Rhames’ Fred G. Duncan, a sort of Mandingo as giant, threatening homo, than it is in Adam Sandler’s Chuck, who is a self-admitted “whore.” In fact, neither Sandler nor Kevin James is anywhere near doing his best work. As for Biel, her body is still a wonderland, and we get to see quite a bit of it.

Although this movie comes across as a rutting goat, where I Now Pronounce You Chuck and Larry actually beats the low expectations that many had for it is in the film’s not-too-preachy attitude about acceptance of gays and the gay lifestyle. The filmmakers and their stars, Sandler and Kevin, vigorously assault anti-gay sentiment, gay-bashing, and gay slurs wherever they find it. The film also offers generous samples of gay clubs, drag queens, and flashy dancing.

On the other hand, the film does offer several brief scenes that reveal the not-fun-side of being a gay couple. Quite frankly, it’s uncomfortable and embarrassing to watch Chuck and Larry’s friends and colleagues suddenly become quite skittish about their old friends once they discover that the duo is a gay couple. Even worse is to watch the people that Larry knows from his children’s school, sports leagues, and the Boy Scouts suddenly remove his name from participation lists. It’s almost as if he died.

How this mixture of raunch and gross can have positive messages about family and acceptance of others is a mystery. That the filmmakers made a bad movie so funny and entertaining is an even deeper mystery.

Posted by Leroy Douresseaux at 9:36 PM