Review: "Underworld: Blood Wars" is Fresh Blood for the Franchise 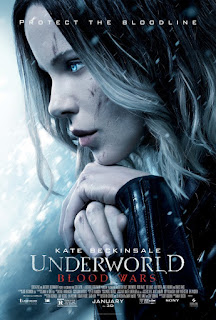 FANTASY/ACTION with elements of sci-fi and horror

Underworld: Blood Wars is a 2016 action horror film from director Anna Foerster.  It is the fifth installment in the Underworld film franchise, which began with the 2003 film, Underworld.  Released in the United States in 2017,  Blood Wars is a direct sequel to the fourth installment, Underworld: Awakening (2012).  In the new film, a legendary and reviled vampire Death Dealer tries to end the seemingly eternal war between the Lycans (werewolves) and the vampires.

As Underworld: Blood Wars begins, the remaining vampire covens are on the verge of being wiped out by the Lycans.  Selene (Kate Beckinsale), the legendary vampire Death Dealer, is trying to end the 1500-year-old war between the species.  The Lycans are led by Marius (Tobias Menzies), who is seeking Selene.  He plans to force Selene to reveal the whereabouts of her daughter, Eve, whose blood Marius believes holds the key to building an army of vampire-werewolf hybrids.

David (Theo James), the younger vampire who befriended Selene (in Underworld: Awakening), and his father, Thomas (Charles Dance), approach the Eastern Coven, the last major vampire coven still standing, to convince its leaders that they need Selene if they are going to defeat Marius.

Semira (Lara Pulver), a council member of the Eastern Coven, seeks to leverage more power for herself in the coven, and she wants Selene to be granted clemency so that she can train the Eastern Coven's neophyte Death Dealers.  However, Selene and David soon find themselves on the run to a mysterious coven where David will discover his true legacy and where Selene will find transformation.

Underworld: Blood Wars is the best Underworld film since the second film, Underworld: Evolution (2006).  It is a shame that it has taken a decade for the franchise to get anywhere near Evolution in terms of quality.  Blood Wars mostly ignores Underworld: Awakening's plot, but does carry over three of the characters from the latter film:  Theo, David, and Eve (mostly talked about rather than seen, except for appearances via flashbacks and a cameo).

Of course, this is an action horror movie, so there is much vampire-werewolf conflict and some vampire-on-vampire violence.  In fact, the two fights here are relatively large scale battles between Lycans and vampires that are similar to the ones found in the third film, Underworld: Rise of the Lycans, a prequel story that recounts the beginnings of the Lycan-vampire blood feud.

The writers of Underworld: Blood Wars also use this film to push the series beyond just being an action-horror franchise.  The series has always treated the origins of the Lycans and vampires as being scientific and medical – viruses and mutations, and the present day war between the two species has been fought with increasingly advanced technological weapons of war, making the series somewhat science fiction.  Now, fantasy elements emerge:  spirits, ghostly realms, dreams, and mysticism.  That is a good thing because I thought Underworld had clearly stagnated with Awakening, so bringing in supernatural fantasy in Blood Wars adds a new dimension to the franchise.

Beyond that, there is no point in me discussing the acting or the character development, as the characters are just pieces to be moved around as this franchise's decision makers give it a new orientation.  Because we get a good movie out of it, the best in a while, I see no reason to complain about acting and character.


The text is copyright © 2017 Leroy Douresseaux. All Rights Reserved. Contact this site or blog for syndication rights and fees.

Posted by Leroy Douresseaux at 4:52 PM