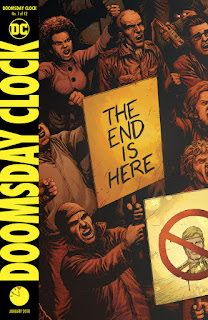 Over 1,000 Midnight Fan Celebrations across North America and the U.K. Usher in a New Era of Comics with DOOMSDAY CLOCK

From Geoff Johns and Gary Frank, the Twelve-Issue Comic Book Series Brings Together the Watchmen and DC Universes for the First Time Ever

BURBANK, Calif.--(BUSINESS WIRE)--The wait is over, and the end is here! The release of DOOMSDAY CLOCK #1, from the New York Times best-selling writer/artist team of Geoff Johns and Gary Frank, was celebrated with a series of midnight events at over 1,000 comic book stores across the United States and United Kingdom. Due to the incredible demand for the series that promises to bring the WATCHMEN characters and the DC Universe together for the first time, DOOMSDAY CLOCK #1 has already gone back to the printer.

“DOOMSDAY CLOCK is unlike anything that we have ever done before, and both Gary and I are incredibly overwhelmed by the support that the fans have shown leading up to the release,” said writer Geoff Johns. “The day before Thanksgiving has always held a special meaning for me – it was when I would buy boxes of comic books before heading home for the holiday. Once there, I would eagerly read through them and discuss every little detail with my friends. My hope is that fans will have that same experience with the first issue of DOOMSDAY CLOCK.”

Comic book retailers marked the occasion by opening their doors just before midnight – the time displayed on the cover of DOOMSDAY CLOCK #1 – for fans eager to get their hands on the comic book release of the year. Fans at Gotham Central Comics and Collectibles in Toronto were treated with a release party and signing with the mastermind behind the project, Johns.

The twelve-issue series was inspired by current worldwide events and Johns and Frank have set out to tell what is sure to be the story of our time.

Frank adds, “We know the bar is set high for fans of WATCHMEN, and we aren’t going into it thinking we can match the best comic of all time. But, we are confident that we have something pretty special and we are anxious for fans to finally have the first issue in hand and see where we are taking this story.”