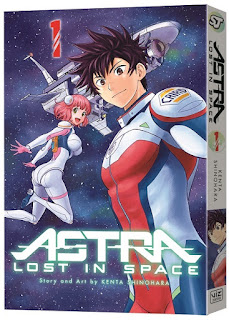 The new manga series, by Kenta Shinohara, will be released in print under the Shonen Jump imprint and is rated ‘T’ for Teens. Series volumes will carry an MSRP of $9.99 U.S. / $12.99 each. Volume 1 is available now as a digital-first release via viz.com and the VIZ Manga App, as well as from the Nook, Kobo, Kindle, iBooks, comiXology, and Google Play stores. Future print and digital editions of ASTRA LOST IN SPACE will be released in English on a quarterly basis.

As ASTRA LOST IN SPACE opens, it’s the first day of Planet Camp, and Aries Spring couldn’t be more excited! Aries, along with eight other strangers, leave for Planet McPa for a weeklong excursion. Soon after they arrive, however, a mysterious orb appears and transports them into the depths of space, where they find an empty floating spaceship…

“ASTRA LOST IN SPACE has thrilled readers of the WEEKLY SHONEN JUMP free section with its engaging characters, unpredictable plot twists and next-level storytelling,” says Marlene First, Editor. “We’re proud to present readers with the series’ print release and invite them to experience a fantastic sci-fi survival epic this winter!”

Creator Kenta Shinohara began his manga career as an assistant to the legendary creator, Hideaki Sorachi, of GINTAMA (also published by VIZ Media). In 2006, he wrote and published a manga one-shot, Sket Dance, that began serialization in 2007 in Weekly Shonen Jump in Japan. Sket Dance went on to win the 55th Shogakukan Manga Award in the Shonen manga category and inspired an anime adaptation in 2011. Shinohara began ASTRA LOST IN SPACE in 2016 for Jump+.

For additional information on ASTRA LOST IN SPACE and other manga titles published by VIZ Media, please visit viz.com.

Posted by Leroy Douresseaux at 4:38 PM