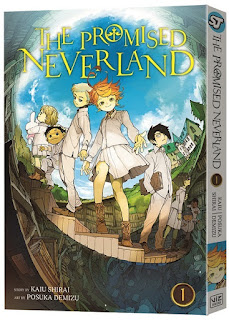 The manga series, by writer Kaiu Shirai and artist, Posuka Demizu, will be released in print under the Shonen Jump imprint and is rated ‘T+’ for Older Teens. Series volumes will carry an MSRP of $9.99 U.S. / $12.99 CAN each. Volume 1 of THE PROMISED NEVERLAND also launches digitally on December 5th via viz.com and the VIZ Manga App, as well as from the Nook, Kobo, Kindle, iBooks, comiXology, and Google Play stores. Future print and digital editions of the series will be released in English on a quarterly basis.

In THE PROMISED NEVERLAND, Emma, Norman, and Ray are the brightest kids at the Grace Field House orphanage. And under the care of the woman they refer to as “Mom,” all the kids have enjoyed a comfortable life. Good food, clean clothes and the perfect environment to learn—what more could an orphan ask for? One day, though, Emma and Norman uncover the dark truth of the outside world they are forbidden from seeing.

“THE PROMISED NEVERLAND first thrilled readers in the pages of WEEKLY SHONEN JUMP with its suspenseful story and gripping illustrations and has become one of the publication’s most popular titles of 2017,” says Alexis Kirsch, Editor. “We are pleased to present readers with the opportunity to expand their personal manga collections with this incredible tale in time for the holidays!

Writer Kaiu Shirai debuted in 2015 with Ashley Gate no Yukue on the Shonen Jump+ website. Shirai first worked with Posuka Demizu on the two-shot manga, Poppy no Negai, which was released in February 2016.

Posuka Demizu debuted as a manga artist with the 2013 CoroCoro series, Oreca Monster Bouken Retsuden. A collection of illustrations, The Art of Posuka Demizu, was released in 2016 by PIE International.

For additional information on THE PROMISED NEVERLAND and other manga titles published by VIZ Media, please visit viz.com.

Posted by Leroy Douresseaux at 5:29 AM