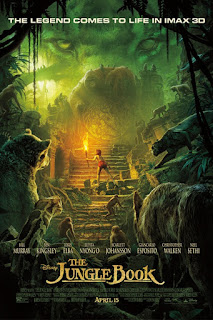 The Jungle Book is a 2016 fantasy adventure film directed by Jon Favreau and produced by Walt Disney Pictures.  The film is a live-action remake of Disney's classic animated film, The Jungle Book (1967), and both films are based on stories from The Jungle Book (1894), the collection of stories by Rudyard Kipling.  The Jungle Book 2016 focuses on a boy raised by wolves who makes a journey of self-discovery after a fearsome tiger threatens his life.

The Jungle Book focuses on Mowgli (Neel Sethi), a human who is raised by the wolf Raksha (Lupita Nyong'o) and her pack, led by her mate, Akela (Giancarlo Esposito).  Mowgli is called a “man-cub” and lives in harmony with the animals in a jungle in India.  However, Shere Khan (Idris Elba), a tiger with a scar on its face, catches Mowgli's scent; Khan hates man because it was a man that scarred his face.  Now, Khan has decided to kill Mowgli.

The black panther, Bagheera (Ben Kingsley), who rescued Mowgli when he was a baby and brought him to the wolves, decides that he must take the man-cub out of the jungle and get him to a nearby man village.  Shere Khan, however, is not content with Mowgli leaving the jungle; he wants to kill him.  Mowgli must prove to everyone, including Bagheera and his new friend, Baloo the sloth bear (Bill Murray), that the jungle is where he belongs.

The Jungle Book 2016 is not a great movie, but it is a pretty good movie.  The voice acting is good, but only Christopher Walken as King Louie the Gigantopithecus (an extinct genus of ape), and Idris Elba as Shere Khan bring real power, heat and menace to their voice acting.  As Mowgli, one of the few real or non-computer generated characters, Neel Sethi gives a performance that has both strong and weak moments, but overall is good.

The most impressive things about The Jungle Book 2016 are the visual effects.  The animal characters are some of the most realistic computer-generated animals that I have ever seen in a movie.  The sheer number and variety of animals make this the greatest cinematic achievement in terms of using computer software to create animals.  If there is better, I have not seen it yet, but I want to see that movie or movies.

The Jungle Book 2016 will not make you forget the 1967 film, which I do not consider to be among the best of Disney's animated films.  Still, it is a truly nice family movie that even some adults can find entertaining, and, of course, the visual effects achievements here make The Jungle Book a must-see for film fans.