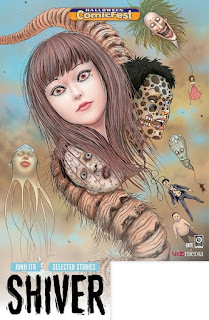 VIZ Media sends chills down the spines of readers and manga fans for Halloween ComicFest 2017 with a special FREE sampler featuring an excerpt from SHIVER: Junji Ito Selected Stories, the upcoming release from the celebrated master of horror manga, Junji Ito.

SHIVER will be released in a deluxe hardcover edition by VIZ Media on December 19th, 2017 under its VIZ Signature imprint. The manga anthology includes nine of Junji Ito’s best short stories, as selected by the author himself and presented with accompanying notes and commentary. An arm peppered with tiny holes dangles from a sick girl’s window… After an idol hangs herself, balloons bearing the faces of their destined victims appear in the sky… An amateur film crew hires an extremely individualistic fashion model and faces a real bloody ending… An offering of nine fresh nightmares for the delectation of horror fans.

Manga creator Junji Ito made his professional debut in 1987 and has gone on to be recognized as one of the greatest contemporary artists working in the horror genre. His critically acclaimed titles include TOMIE and UZUMAKI, which were adapted into critically praised live-action films, as well as GYO, which was adapted into an animated feature film. TOMIE, UZUMAKI, GYO, and Ito’s celebrated manga short story anthology FRAGMENTS OF HORROR are all published in English by VIZ Media in deluxe hardcover editions available under the VIZ Signature imprint. Ito’s influences include classic horror manga artists Kazuo Umezu and Hideshi Hino, as well as authors such as Yasutaka Tsutsui and H.P. Lovecraft.

Posted by Leroy Douresseaux at 8:35 PM