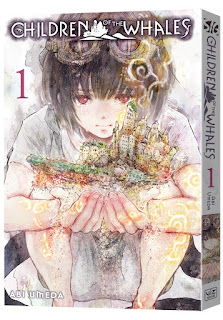 The series, featuring story and art by creator Abi Umeda, is rated ‘T+’ for Older Teens and will be published in print and digital editions under the VIZ Signature imprint. Volume 1 will carry a print MSRP of $12.99 U.S. / $17.99 CAN. The series also launches digitally via VIZ.com and the VIZ Manga App, as well as from the Nook, Kobo, Kindle, iBooks, comiXology, and Google Play stores. Future volumes of CHILDREN OF THE WHALES, which is also continuing in Japan, will be published in English by VIZ Media on a bi-monthly basis.

In an endless sea of sand drifts the Mud Whale, a floating island city of clay and magic. In its chambers a small community clings to survival, cut off from its own history by the shadows of the past. Chakuro is the archivist for the Mud Whale, diligently chronicling the lives and deaths of his people. As one of the short-lived thymia wielders, he knows his time is limited and is determined to leave a better record than his predecessors. But the steady pace of their isolated existence on the Mud Whale is abruptly shattered when a scouting party discovers a mysterious young girl who seems to know more about their home than they do…

“With an intriguing plot, beautiful, European-comics-influenced artwork and fantasy-inspired setting, CHILDREN OF THE WHALES will captivate manga readers as well as mainstream adventure and comics fans,” says Pancha Diaz, Editor. “When the inhabitants meet a mysterious girl from another floating island, their lives and society are irrevocably changed!”

Abi Umeda debuted as a manga creator with his one-shot story, “Yukokugendan,” which was featured in Weekly Shonen Champion. CHILDREN OF THE WHALES is her 8th manga work. The series has also spawned an anime adaptation that recently debuted in Japan.

For additional information on CHILDREN OF THE WHALES and other manga titles distributed and published by VIZ Media, please visit VIZ.com.