Review: First "Boo! A Madea Halloween" Not One of the Better Madea Movies 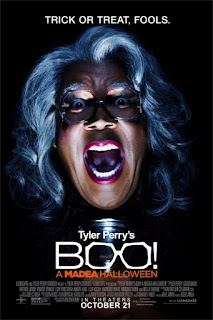 Boo! A Madea Halloween begins about mid-day on Halloween.  At Upsilon Theta college fraternity house. Jonathan (Yousef Erakat), the fraternity leader, and his fellow fraternity brothers are finalizing plans for their big Halloween party for that night.  The brothers take notice of 17-year-old Tiffany Simmons (Diamond White) and her three friends, 17-year-old Aday (Liza Koshy), 18-year-old Rain (Bella Thorne) and 18-year-old Leah (Lexy Panterra), as they walk past their fraternity house.  Jonathan invites the four teens to their party.

However, Tiffany's father, Brian Simmons (Tyler Perry), does not want Tiffany and Aday to attend the party because, at the age of 17, they are too young to be partying with college-age young men.  Sensing that his daughter will disobey him, Brian convinces his aunt, Mabel “Madea” Simmons (Tyler Perry), to stay at his house and babysit Tiffany.  Madea's brother, Joe Simmons (Tyler Perry), who is Brian's father; marijuana aficionado, Betty Ann “Aunt Bam” Murphy (Cassi Davis); and Joe's lover, Hattie Mae Love (Patrice Lovely), tag along.

Madea is strict, but Tiffany proves to be more stubborn and also craftier than Madea expects.  When she discovers that Tiffany and Aday have indeed gone to the fraternity party, Madea is ready to deal out some punishment; instead, this pugnacious matron will spend a haunted Halloween dealing with ghosts, goblins, ghouls, poltergeists, zombies, and killer clowns.

Boo! A Madea Halloween has its moments.  It is a Madea movie after all, and if you enjoy the antics of Tyler Perry's most beloved character, Mabel “Madea” Simmons, you will find something or some things to like about Boo! A Madea Halloween.  However, it is the weakest “Madea-verse” movie since Meet the Browns (2008), in which Madea only made a cameo appearance.

I like Boo!'s young and diverse cast, although I wish the characters lived up to the energy brought by the young actors.  The youthful energy is needed because characters that are old favorites have worn out their welcome; Aunt Bam, I'm looking at you.  And Uncle Joe isn't at his best here.

This isn't one of Tyler Perry's better efforts at playing Madea, but there is a gem or two here (such as Madea in church, wanting to be “saved”).  It is only a passable Halloween movie.  That said, I want more Madea and there is a sequel to Boo!, due this fall.  So, it is fair to say that Boo! A Madea Halloween is strictly for Madea fans.

Posted by Leroy Douresseaux at 8:25 AM