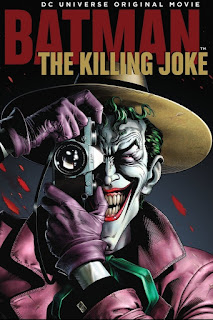 Batman: The Killing Joke is a 2016 animated superhero film from Warner Bros. Animation.  It is the 26th film in Warner's line of DC Universe original animated movies.  Unlike many of those films, which are released straight-to-video, Batman: The Killing Joke did get a one-week theatrical release before being released on DVD and Blu-ray.  Bruce Timm is an executive producer on this film.

In the world of Batman: The Killing Joke, Barbara Gordon/Batgirl (Tara Strong) is the crime-fighting partner of Batman (Kevin Conroy).  They usually work well together, but of late, the two have disagreed on how to deal with Parry Francesco a.k.a. “Paris Franz” (Maury Sterling), the nephew of crime boss, Carlos Francesco (John DiMaggio).  Paris is currently trying to take over his uncle's criminal empire, and he is obsessed with Batgirl.  The fallout from the respective actions of Batman, Batgirl, and Paris lead to the dissolution of the Batman-Batgirl team.

Batman's arch-nemesis, The Joker (Mark Hamill), has escaped prison, and this time he is determined to prove a point to Batman.  Joker launches a brutal assault at Barbara Gordon's home against Barbara and her father, Gotham City Police Department Commissioner James “Jim” Gordon (Ray Wise).  The secret to The Joker's madness lies somewhere in his past, before he became the “Clown Prince of Crime.”  Yes, it's an origin story.

I have seen some Batman films that were gigantic misfires (Christopher Nolan's The Dark Knight Rises), the result being a movie that was more disappointing than bad (which it also was).  I have seen a Batman movie that was a comical blunder (1997's Batman and Robin).  Batman: The Killing Joke is a truly awful and terrible movie.  It is an insult to good Batman storytelling.  The screenplay is written by a critically acclaimed, award-winning, and bestselling comic book writer, Brian Azzarello, who proves that when his work is bad, it makes for dreadful entertainment, which is the case with Batman: The Killing Joke the movie.  [By the way, Batman: The Killing Joke the comic book is way overrated.]

The fact that this movie features Batman and Batgirl having sex on a rooftop is all you need to know about this abomination of a movie.  The only good thing about this movie is that it reunited Kevin Conroy, the voice of Batman, and Mark Hamill (of Star Wars fame) as the voice of The Joker.  Conroy and Hamill are near-legends for playing the characters on the beloved “Batman: The Animated Series,” a Batman animated TV series that began airing in 1992.

However, Batman: The Killing Joke is so bad that if you want Conroy and Hamill, find episodes of cartoon instead of watching this.

Posted by Leroy Douresseaux at 5:38 PM